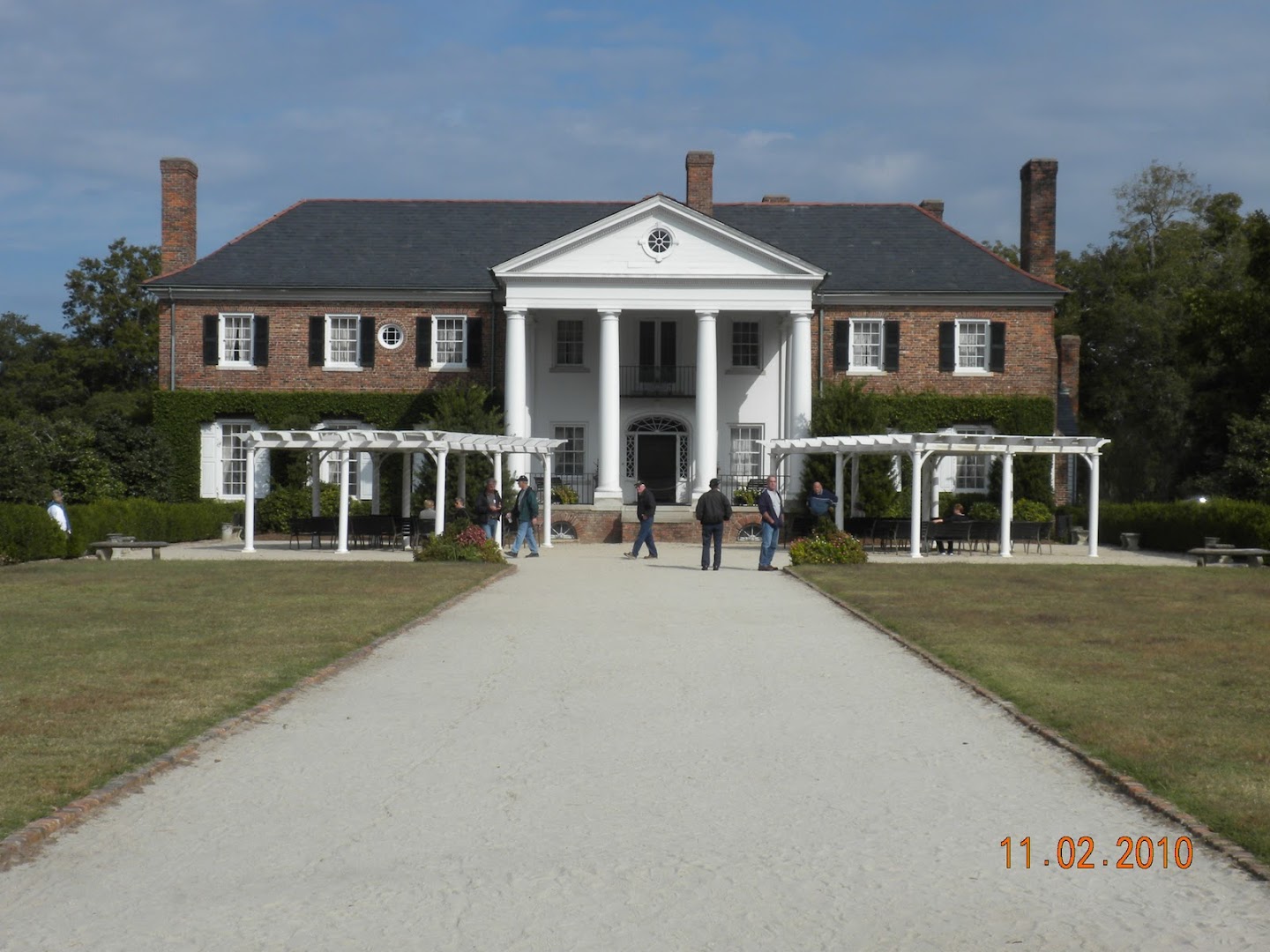 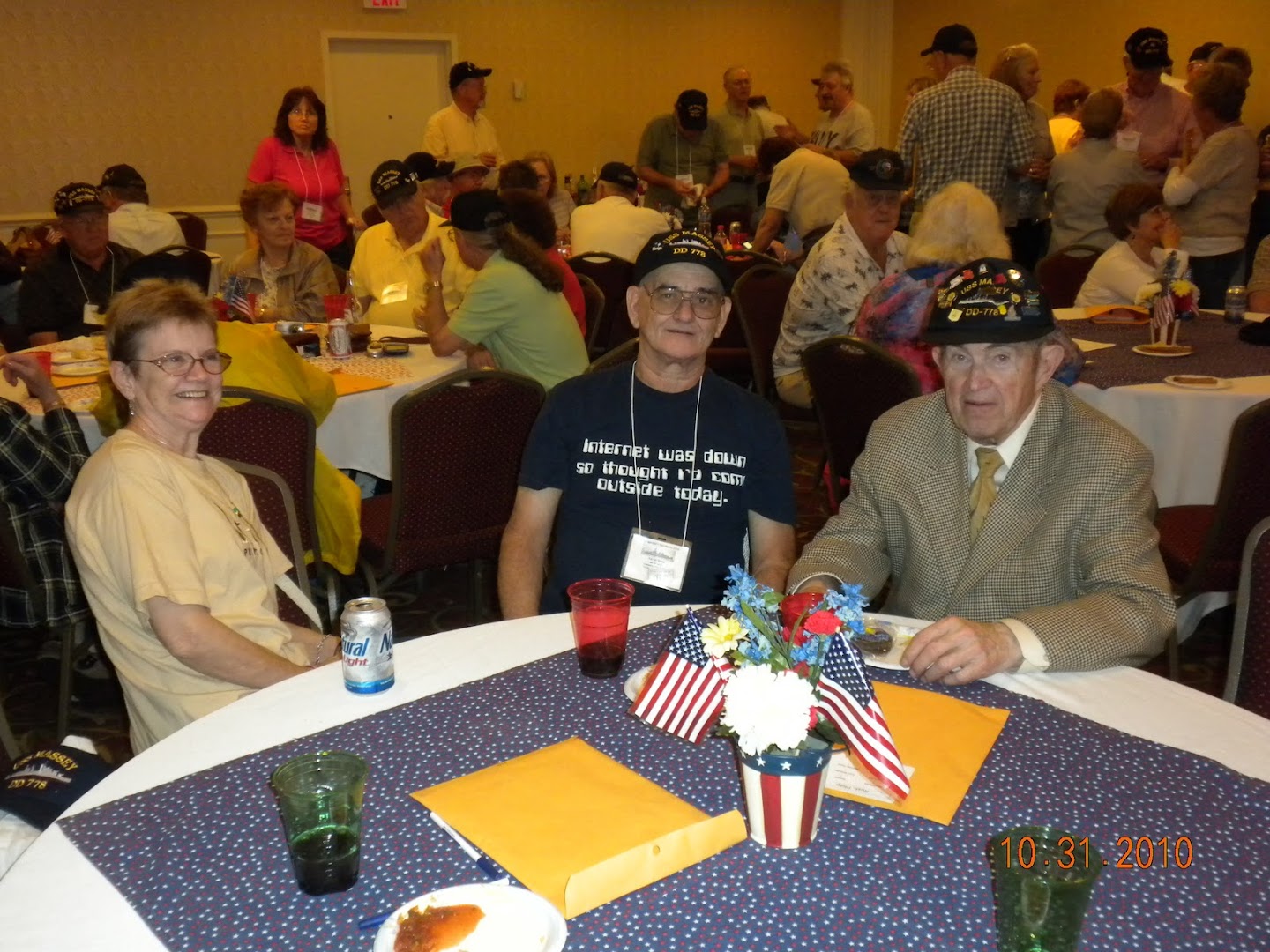 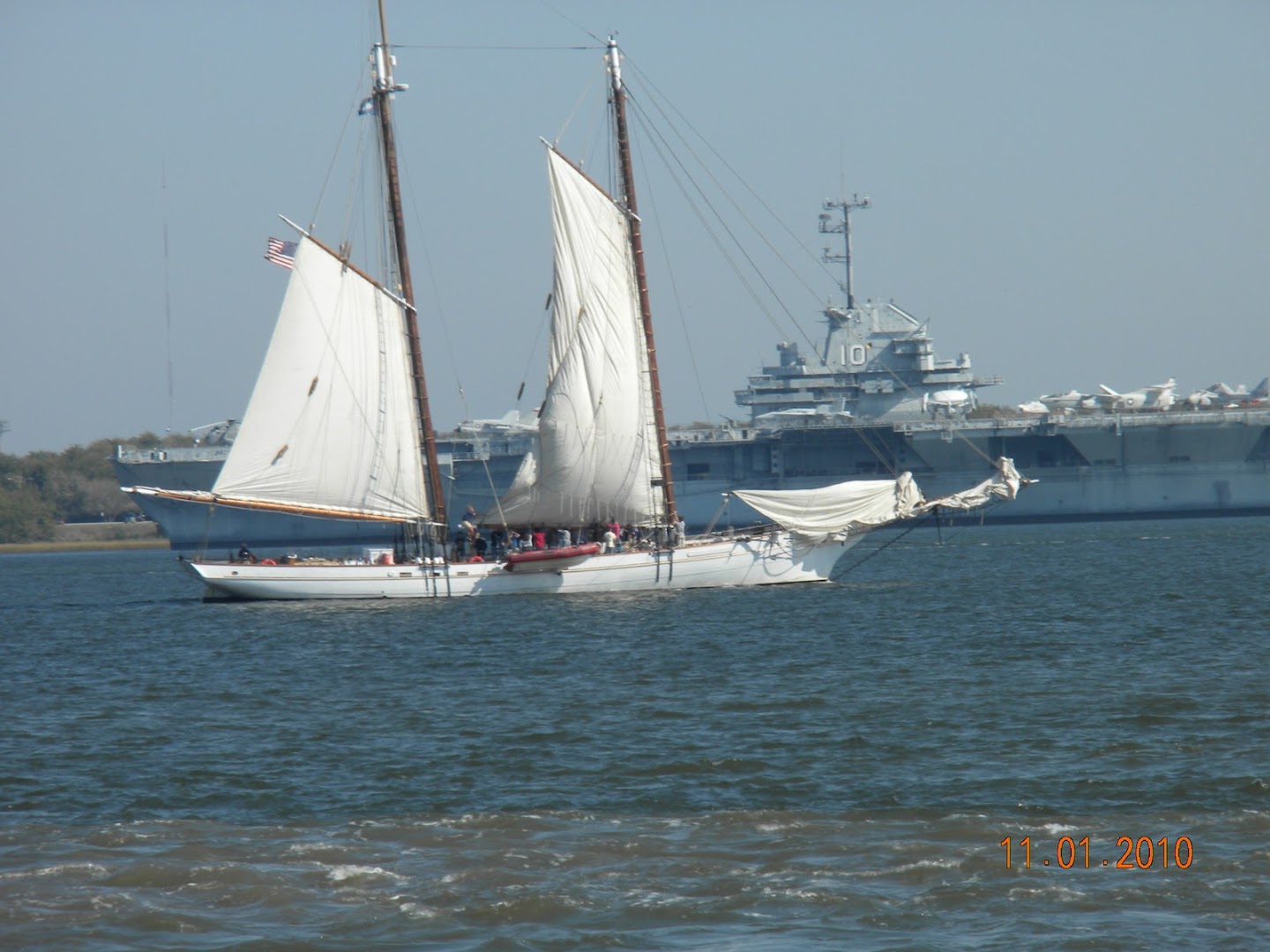 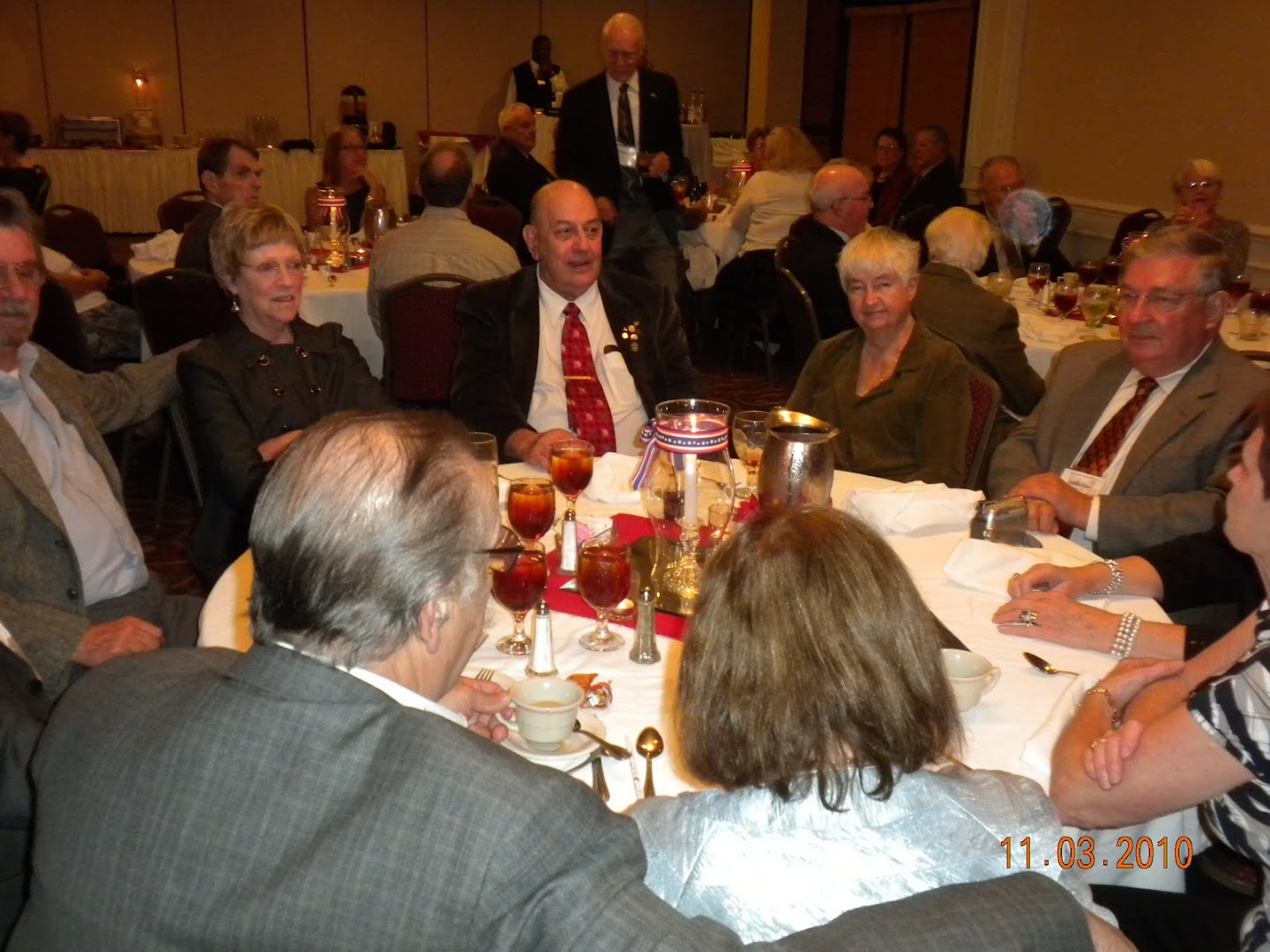 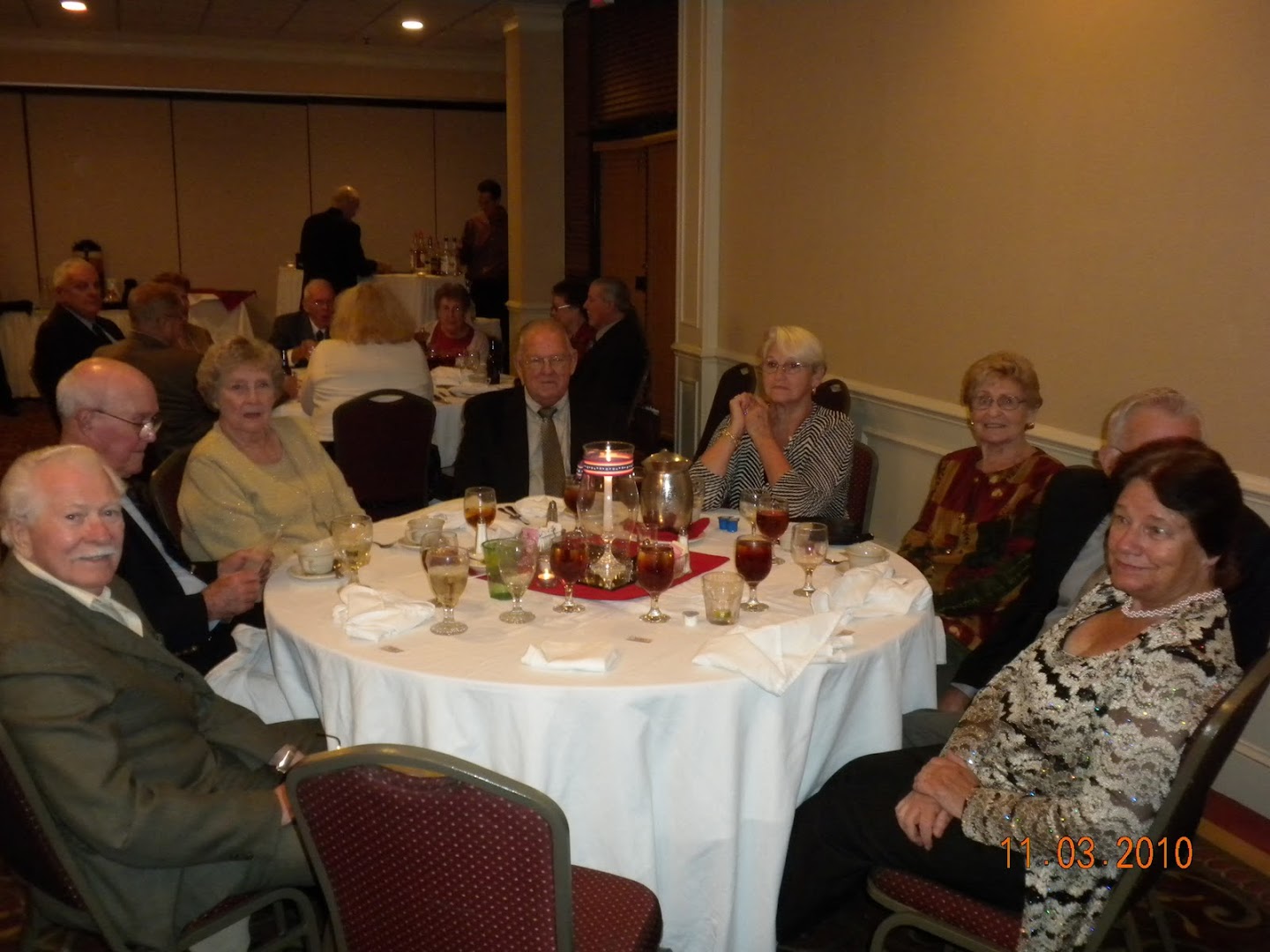 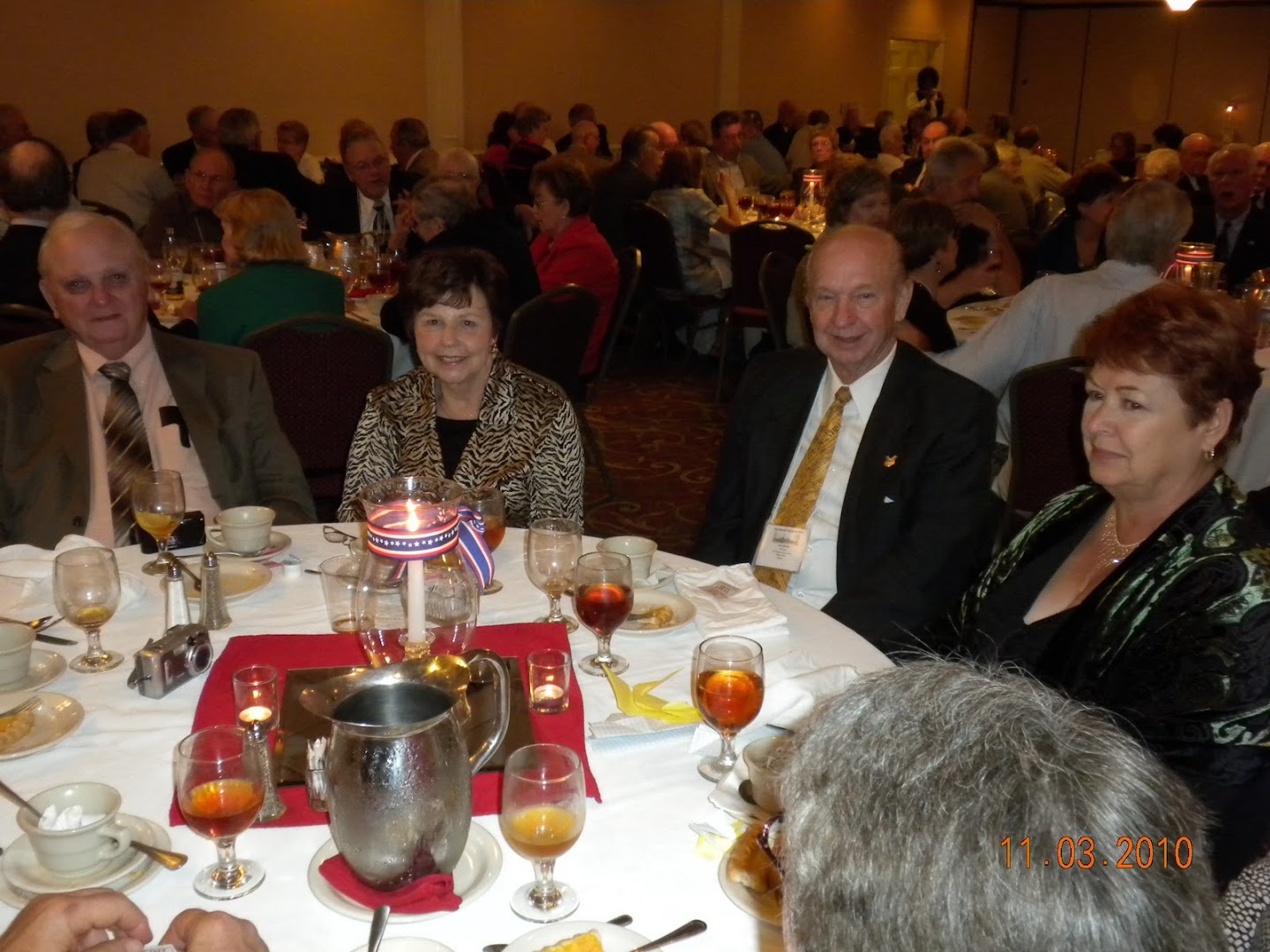 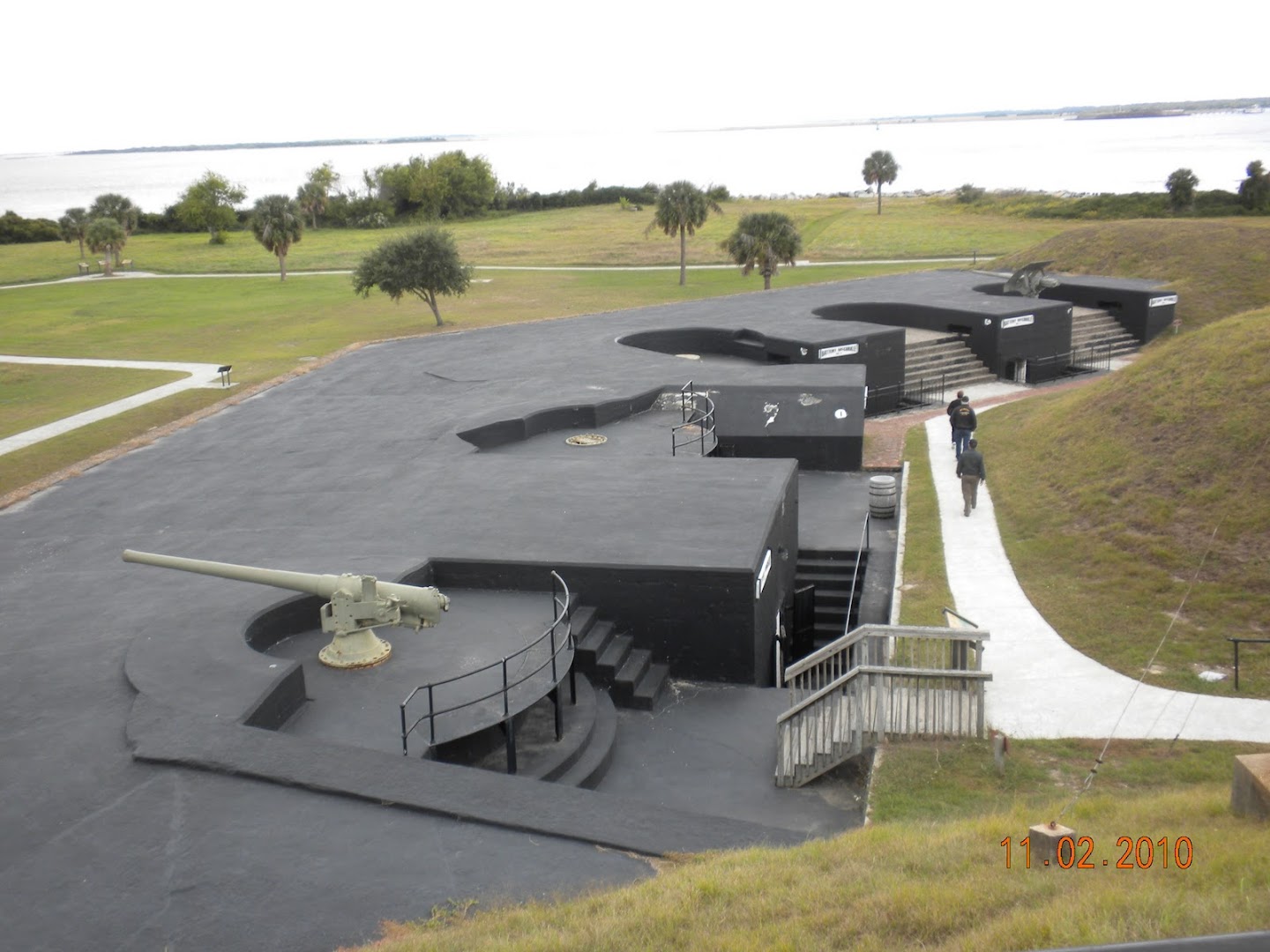 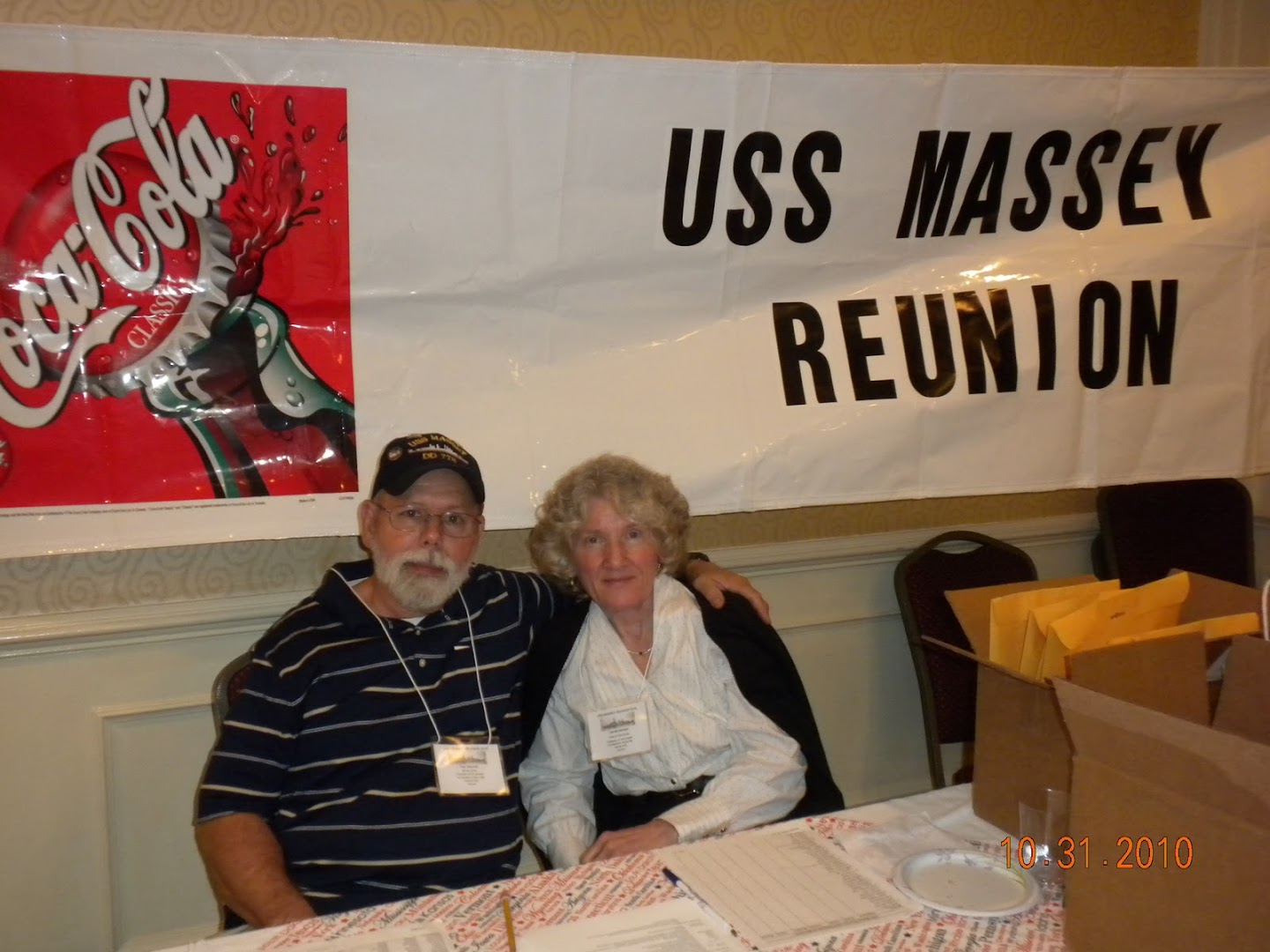 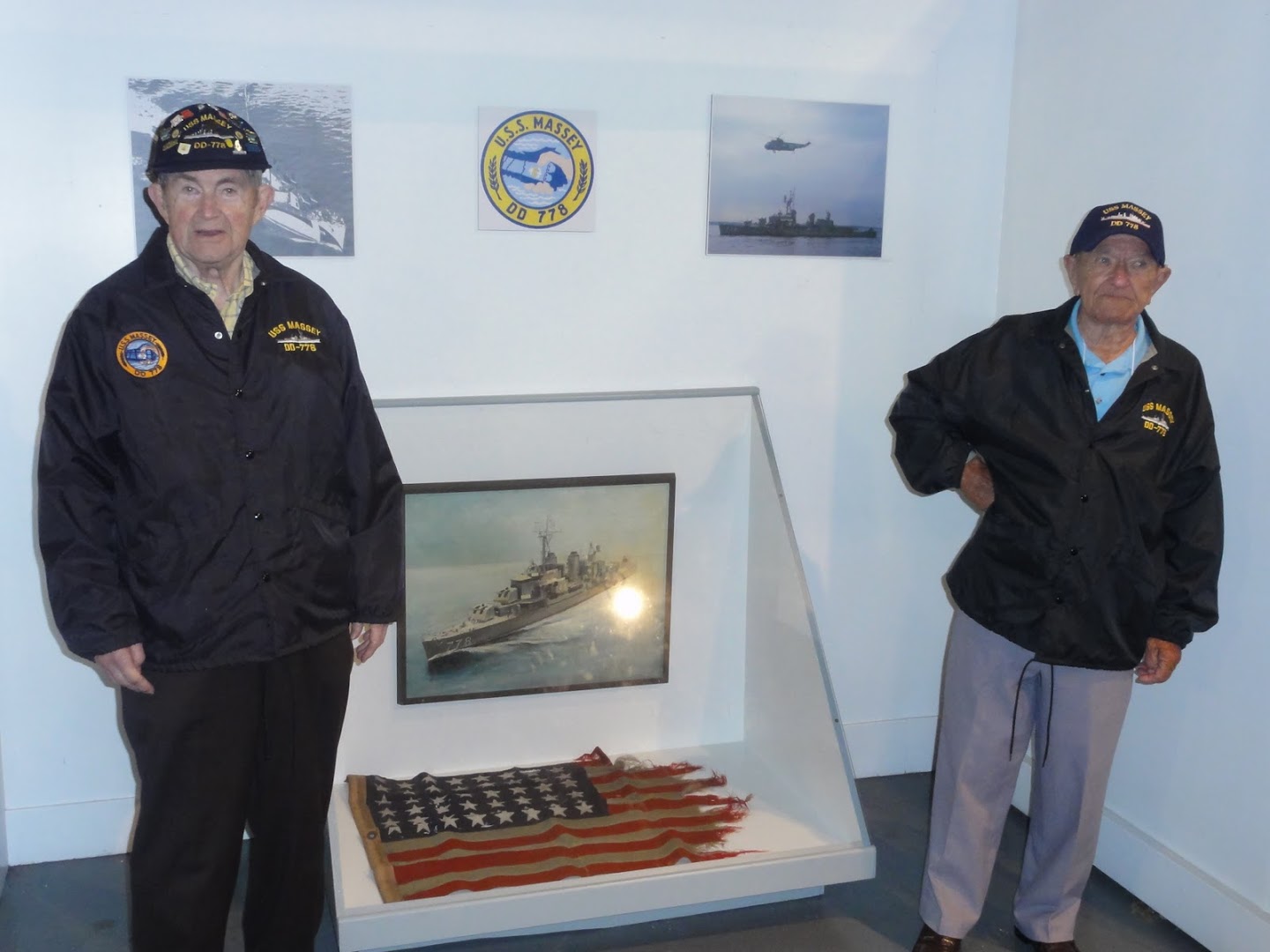 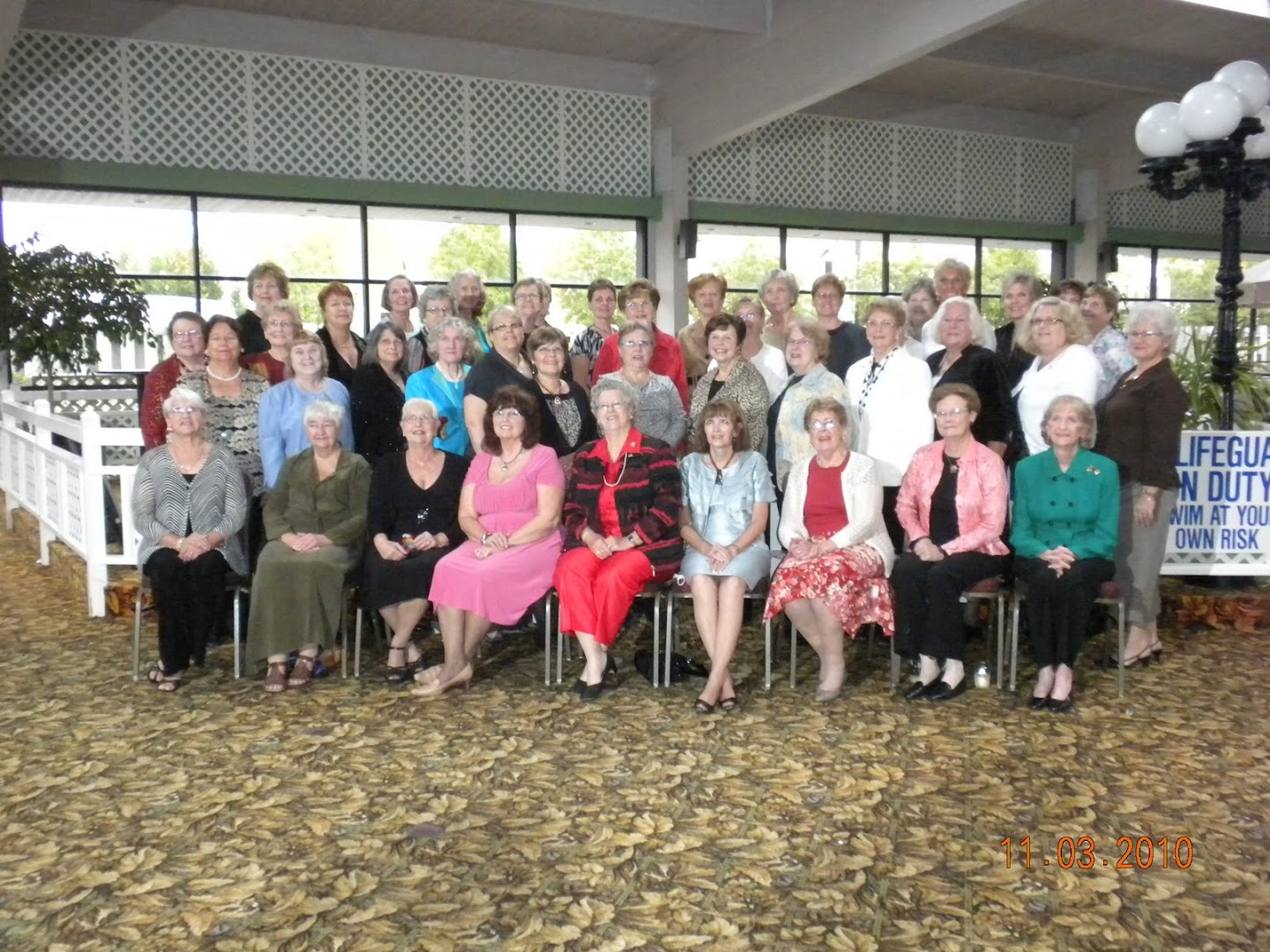 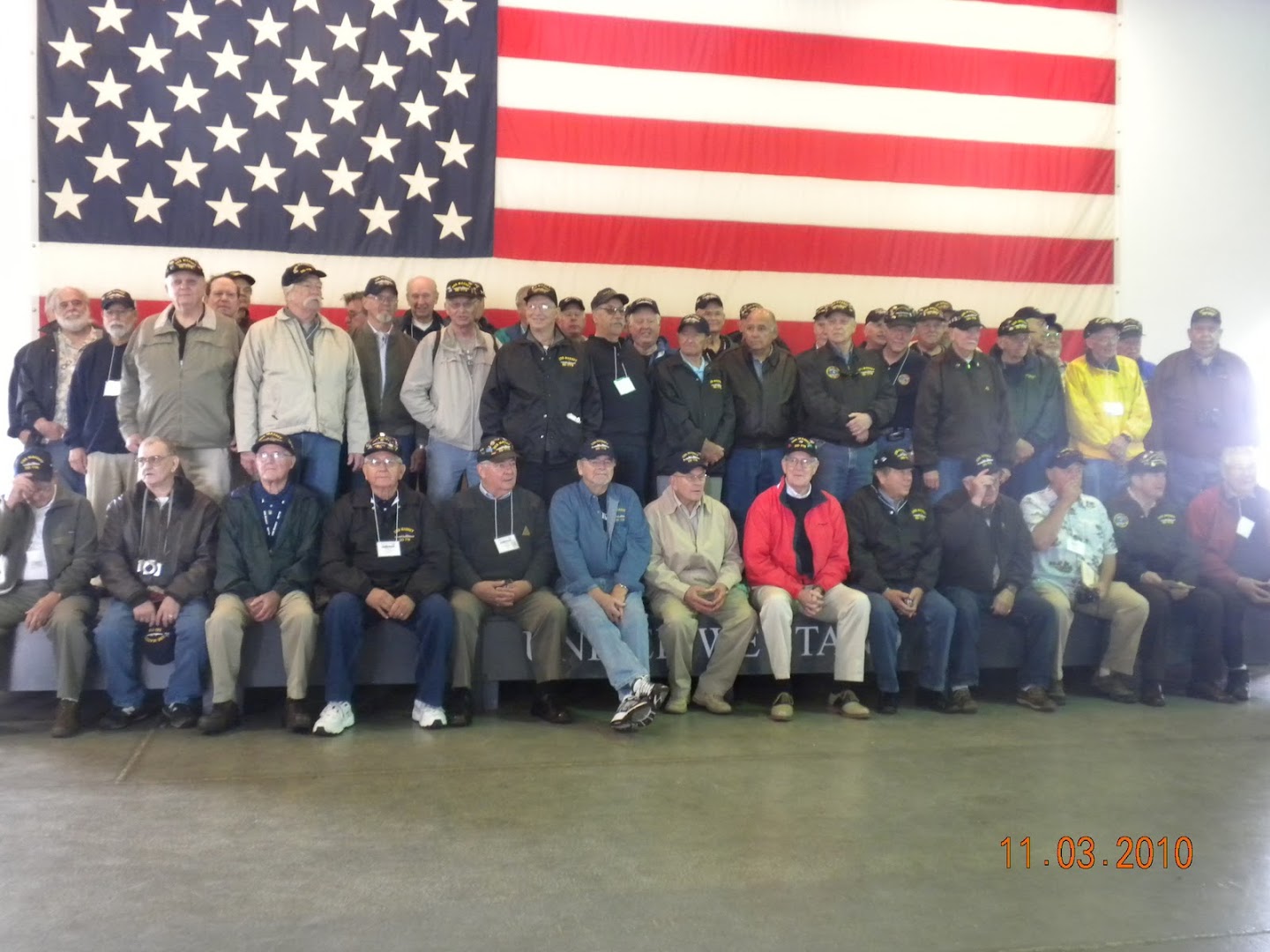 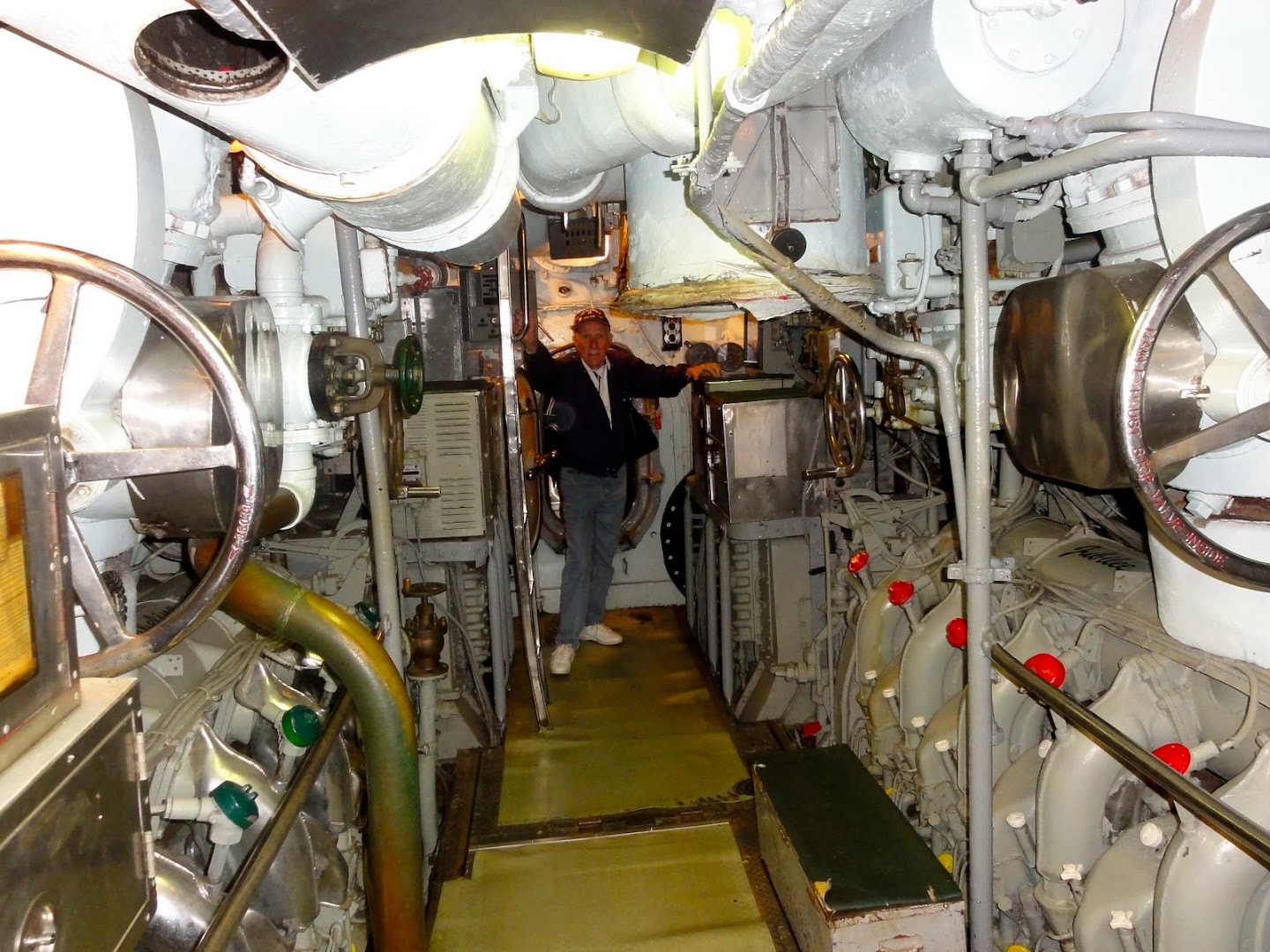 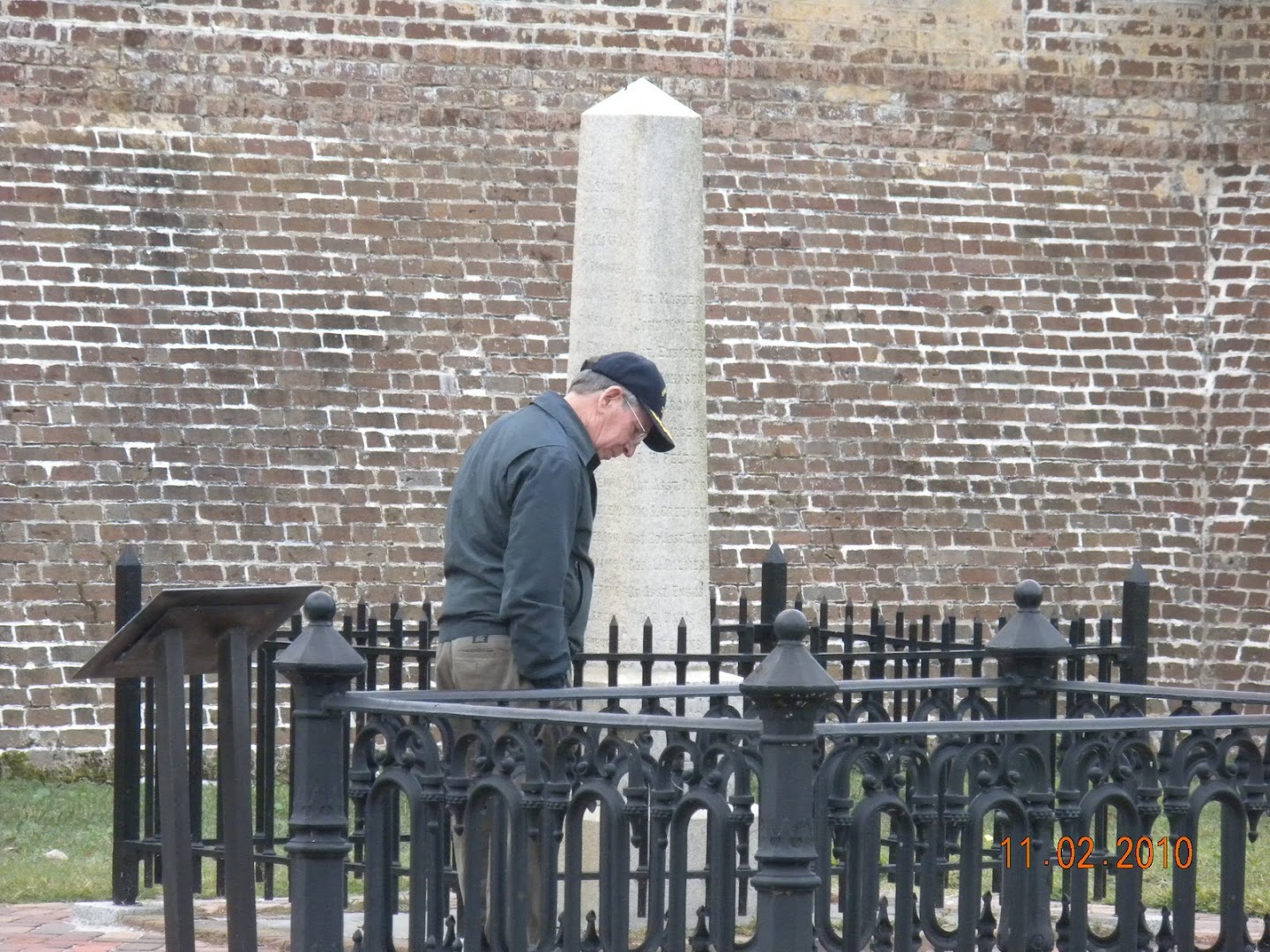 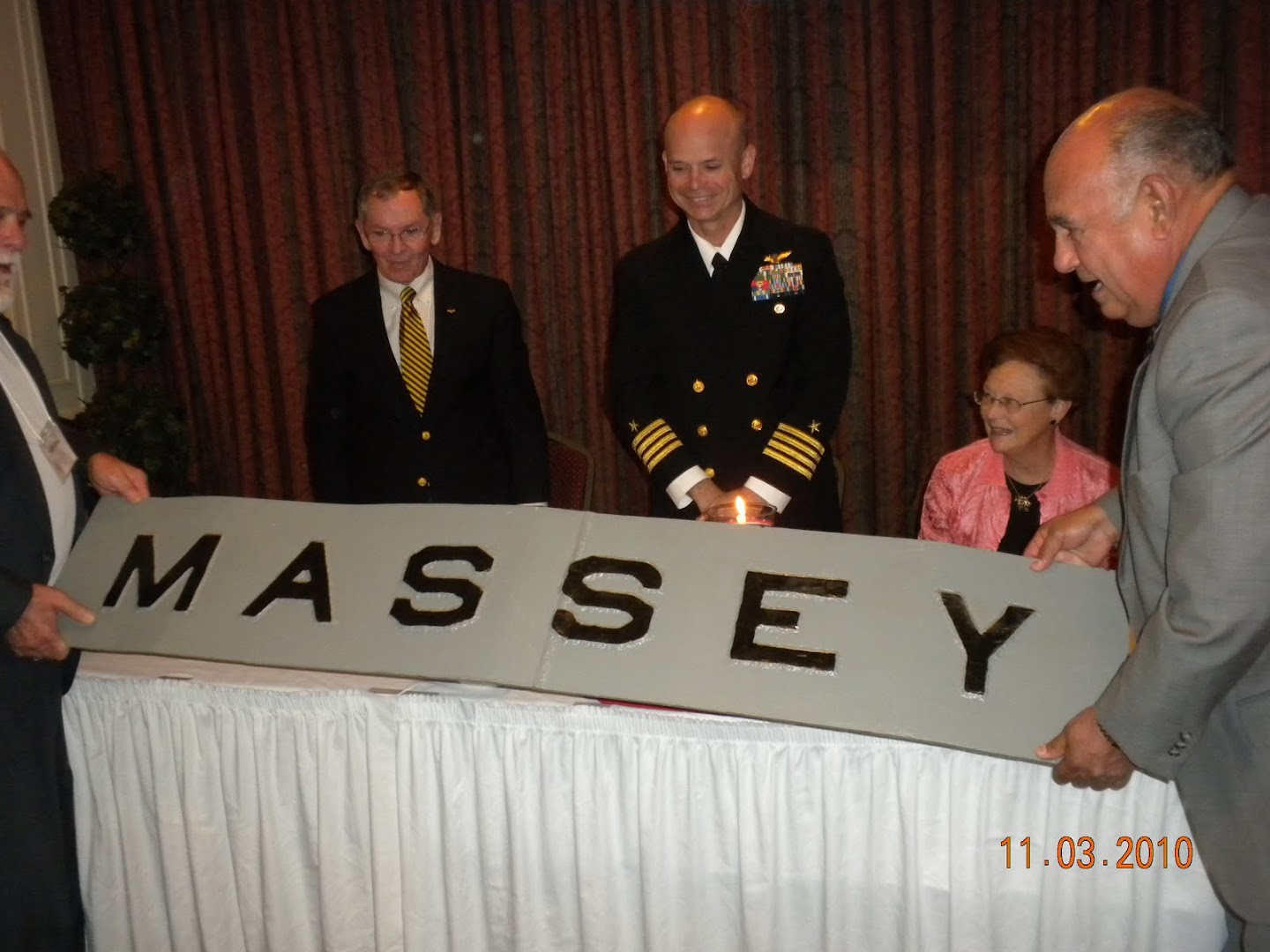 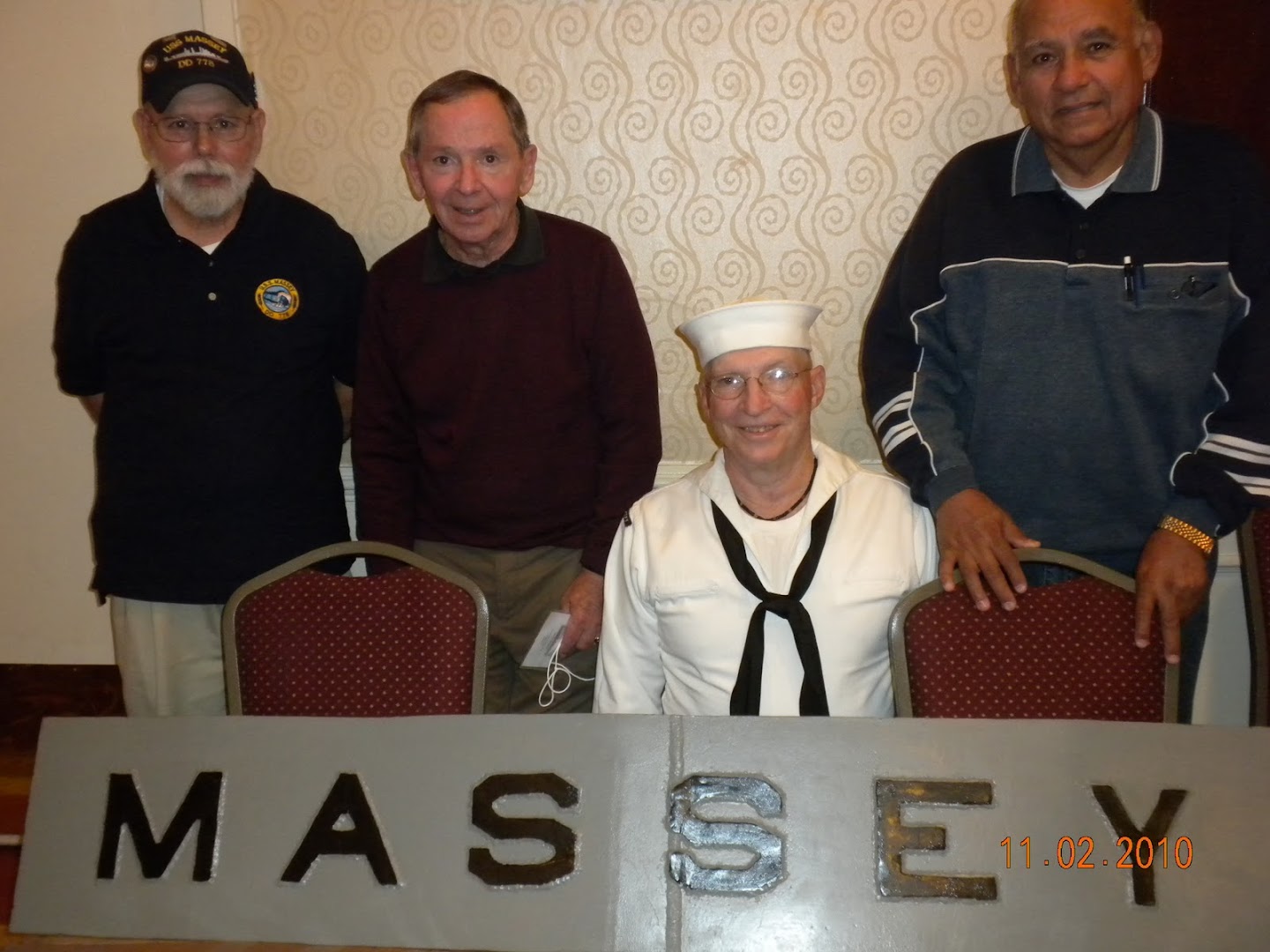 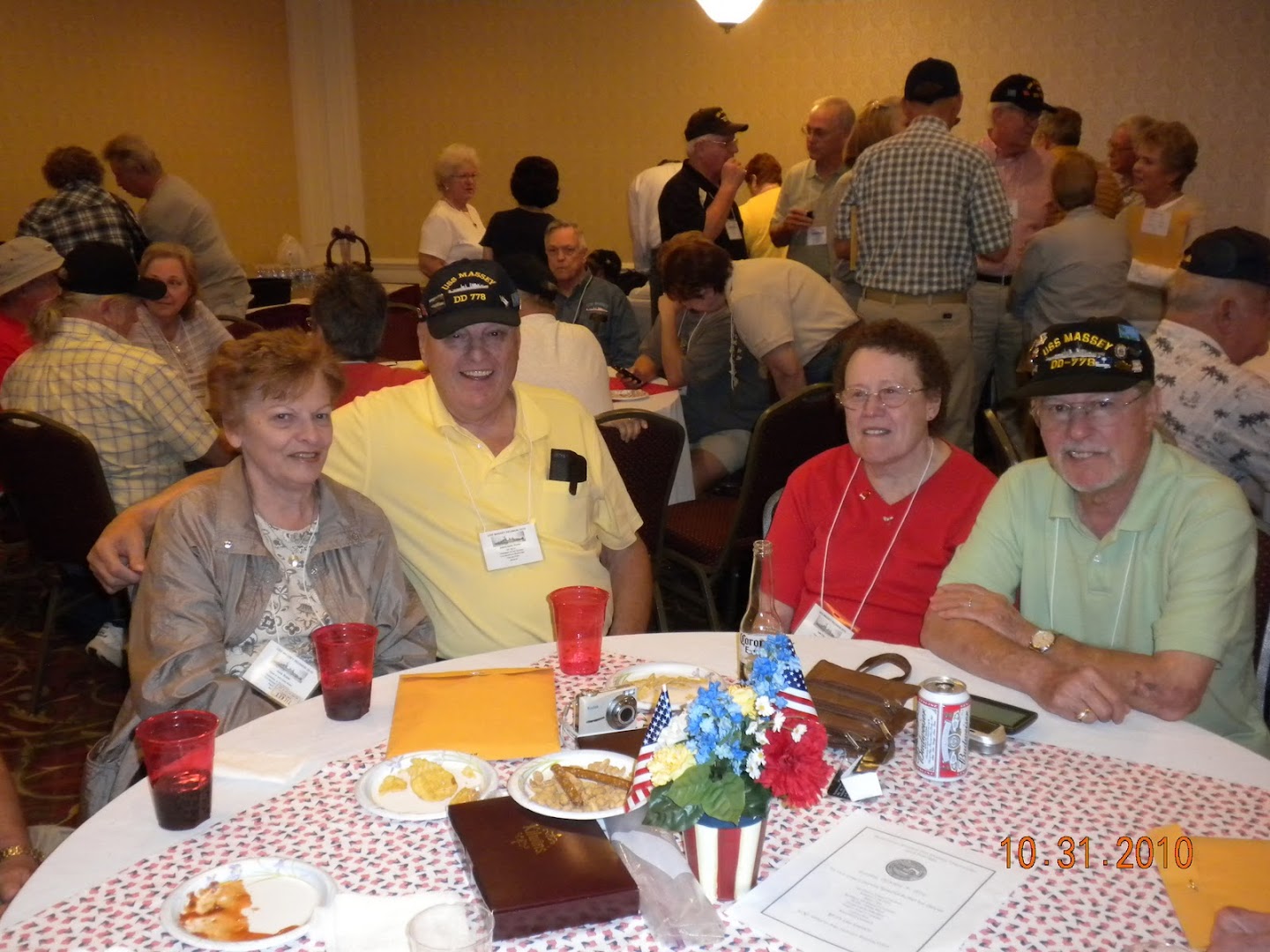 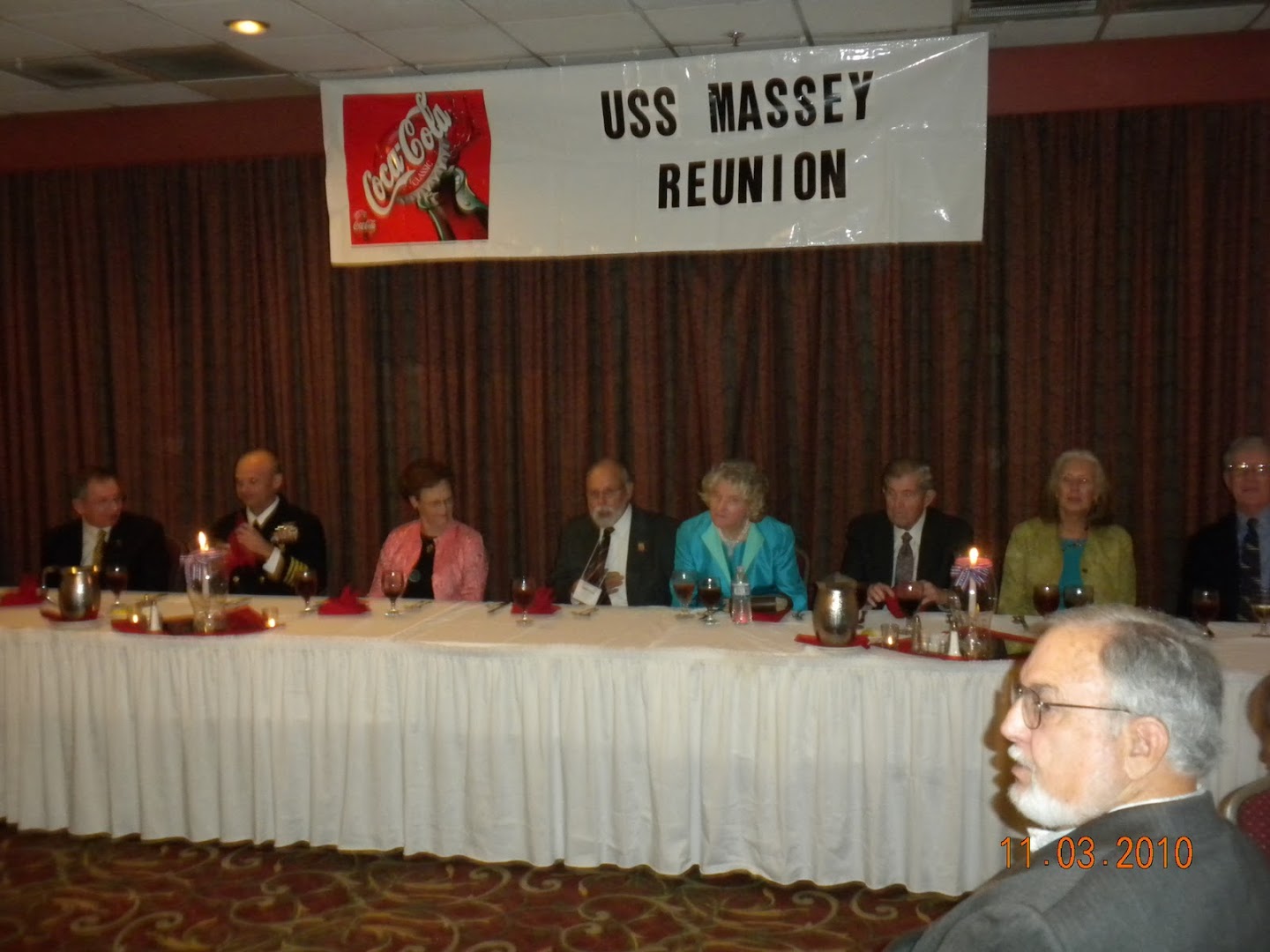 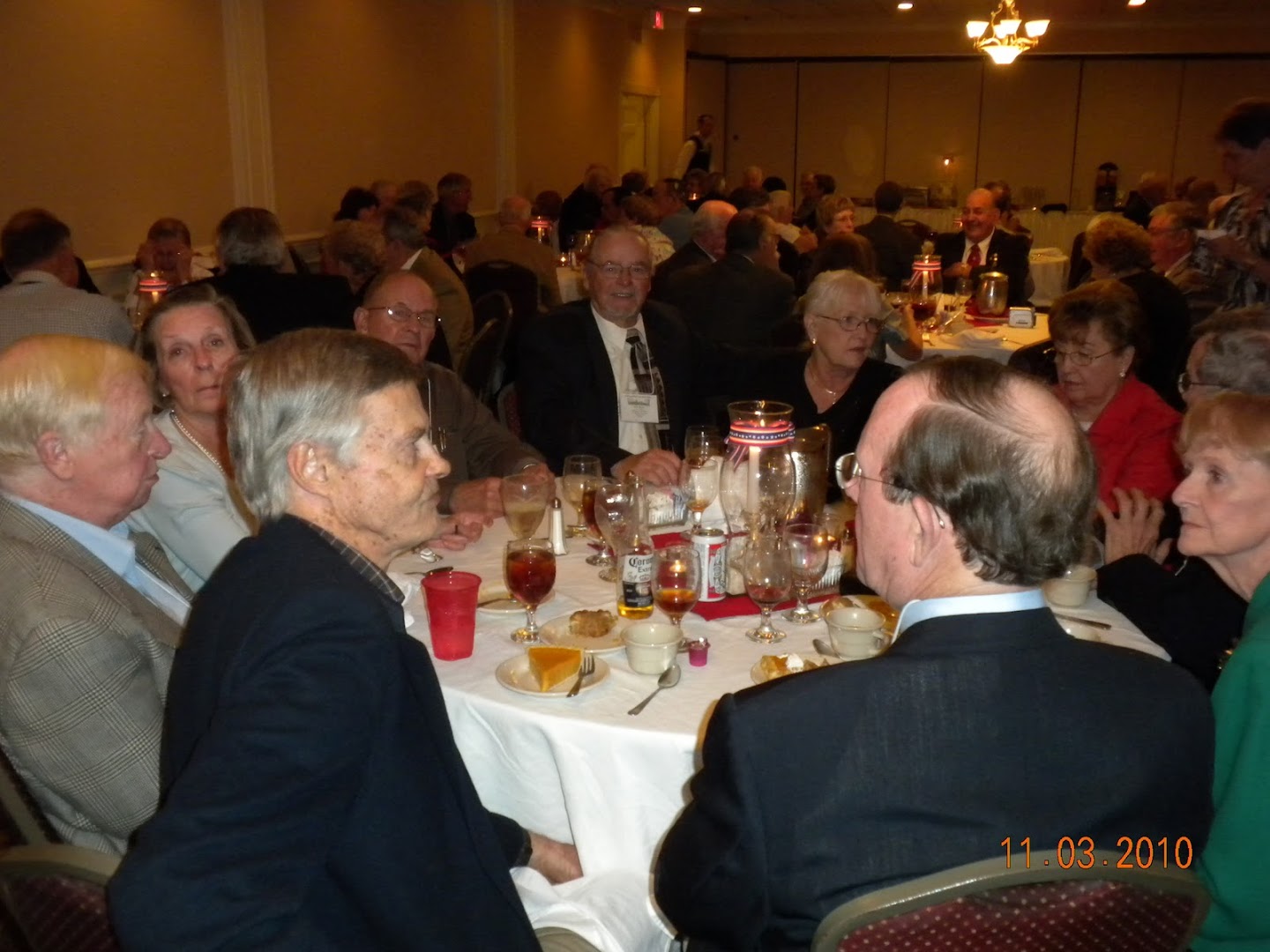 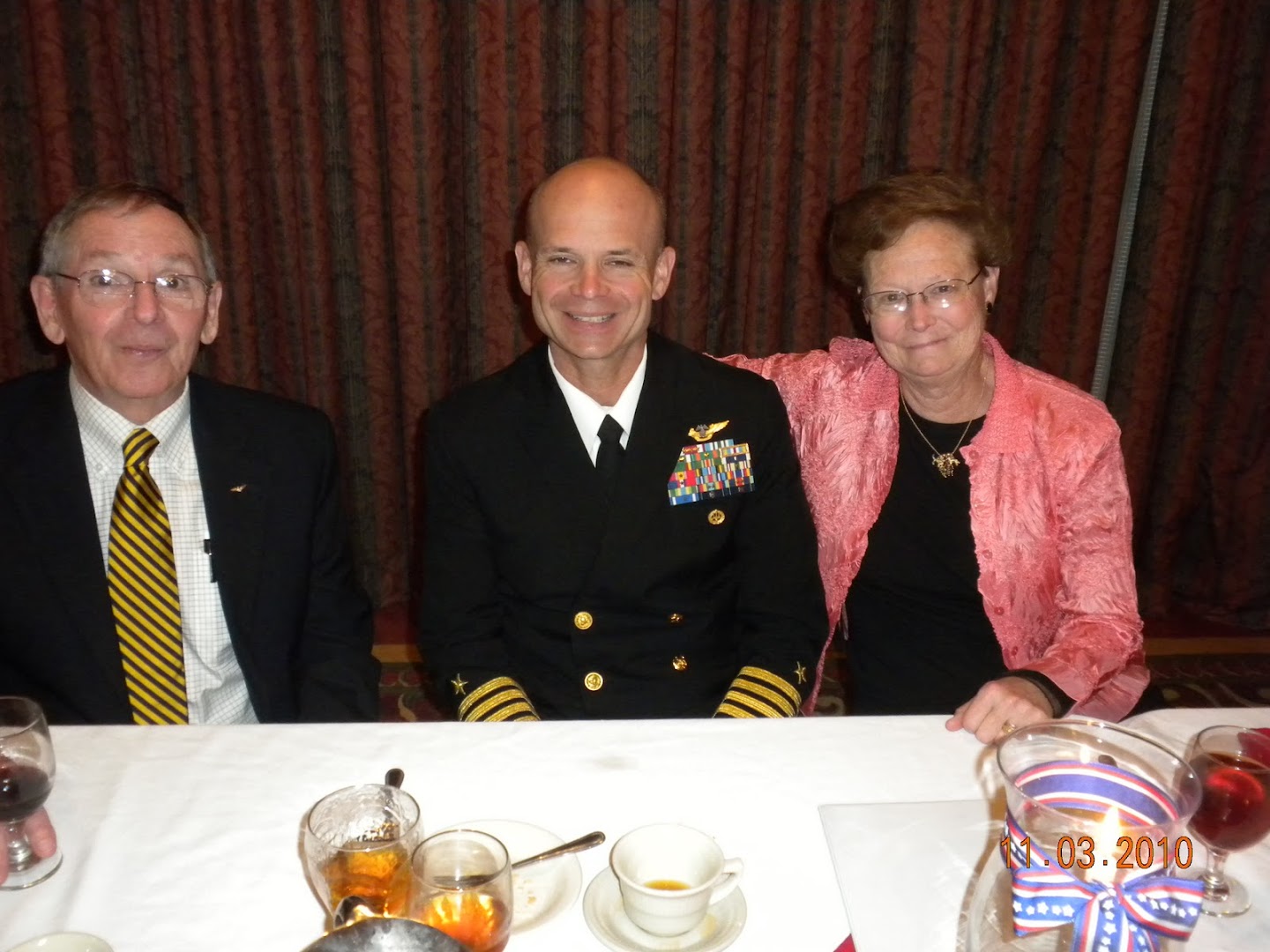 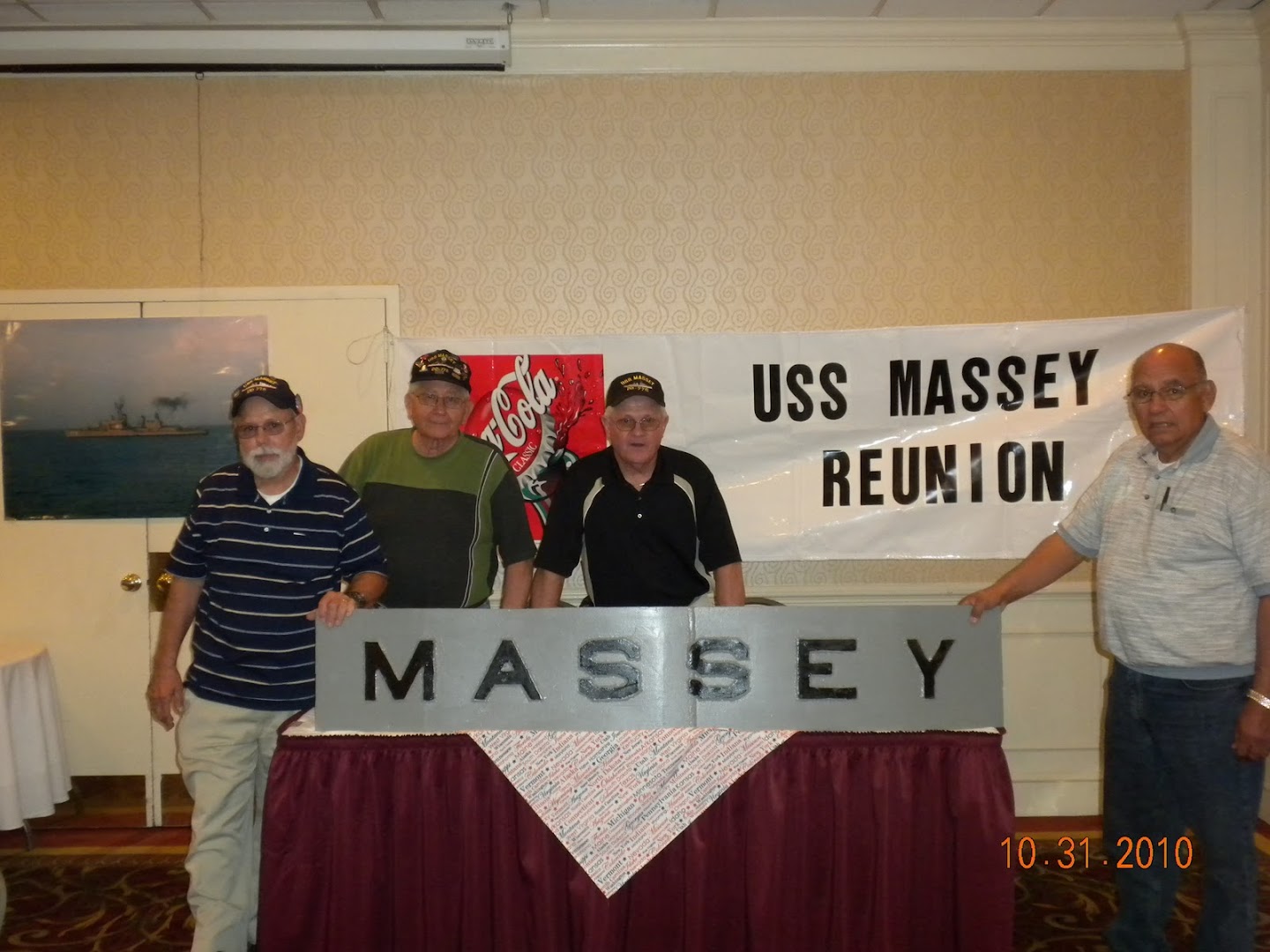 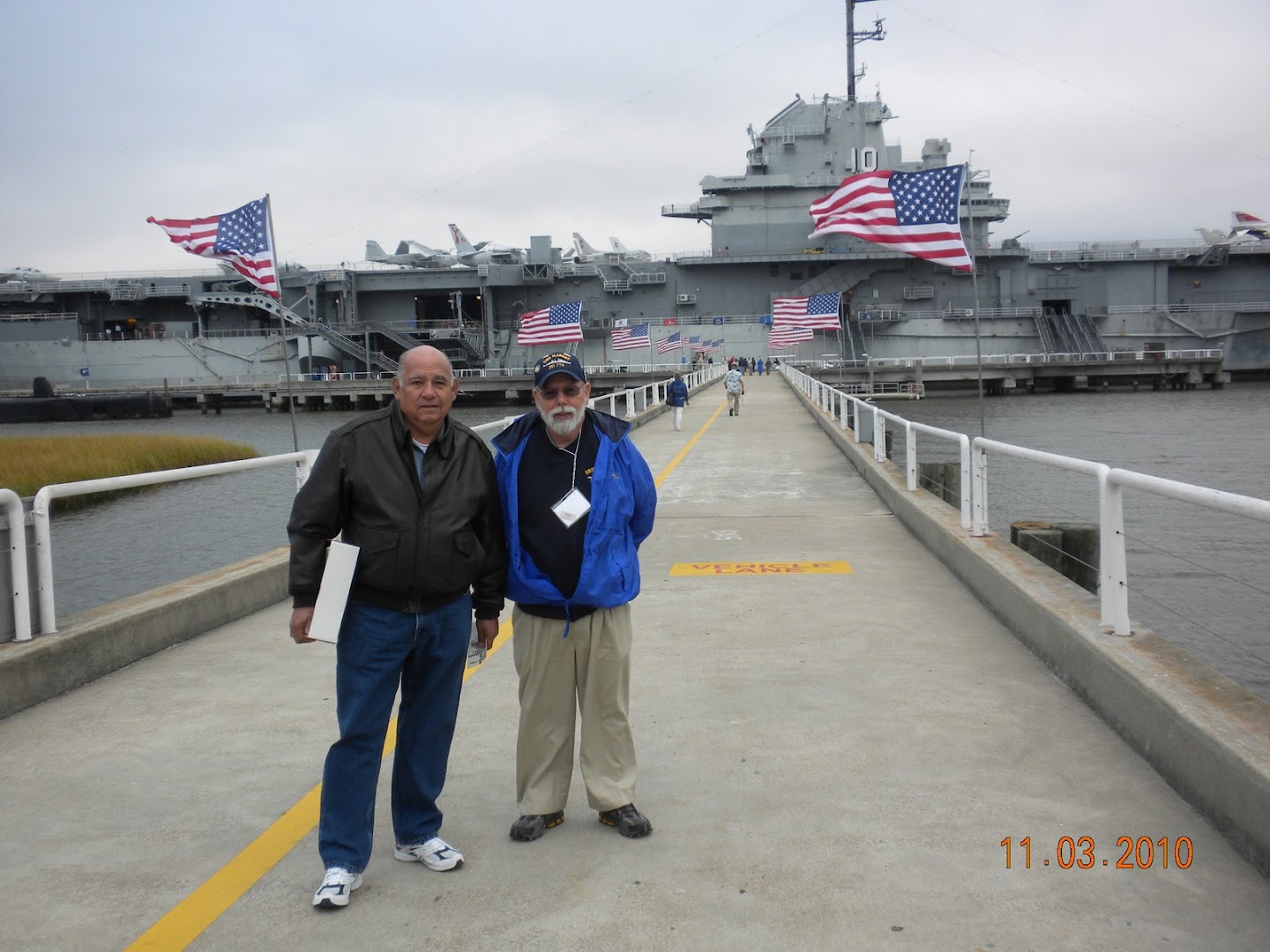 The 2010 MASSEY Reunion, hosted by Tom & Carole Norman and assisted by Juan De la Cruz, was held at the Radisson Airport Hotel in North Charleston, SC, 30 Oct to Nov 4, 2010.

We were honored by the presence of the son of our ship’s namesake, Lance B. Massey, CDR, USN (Ret.), his wife Judy and their son, Captain Lance E. (“LEM”) Massey II, USN.

Sunday was check in. We had a large hospitality room with light snacks, soft drinks, wine, beer and spirits. The spirits ran out Monday night, and Tom tried Tuesday to resupply, only to find out that the spirit store was closed due to elections. OH NO, the guys are gonna hang Tom out to dry!!!! Master At Arms Paul Pavone had to be called in to quell the riot!

Monday – We boarded buses for a tour of “America’s Best Preserved City,” Charleston, South Carolina. We enjoyed a guided tour as we explored this historic city. Favorite sights included: Rainbow Row, cobble stone streets, quaint gardens, many 18th and 19th century homes, buildings and churches, and the Battery over looking the Charleston Harbor and Fort Sumter. We toured The Heyward Washington House, built in 1772 by Daniel Heyward, father of Thomas Heyward, a signer of the Declaration of Independence. It is the only 18th-century house open in the city with an original kitchen house, carriage house in the courtyard. We had time to browse through the Market Square area, well-known for its unique shops, boutiques, restaurants, and pubs. At 2:15, we boarded the tour boat to Fort Sumter, only accessible by boat. On April 12, 1861, Fort Sumter was occupied by Union Troops who refused to vacate the Fort as demanded by the Confederates. All negotiations finally failed and Confederate batteries in the Charleston Harbor commenced a massive bombardment of Fort Sumter, and America’s worst moment of conflict, the “War Between the States” began. Surprisingly there was no loss of life on either side as a direct result of this engagement. The Fort has an excellent museum containing many exhibits. Historians with the National Park Service conducted interesting and informative tours of the Fort. On the return trip back to “Fleet Landing”, we enjoyed a tour of the Charleston Harbor, viewing many points of interest.

Tuesday – We boarded buses for a tour of Fort Moultrie & Boone Hall Plantation, where we had guided tour of the grounds, followed by a guided tour of the mansion. Fort Moultrie, as it is today, was completed in 1809 and is the third fort built on the site. The original palmetto log fort was started in 1776 and was only half-completed when attacked by a British Fleet on June 28, 1776. Colonel William Moultrie’s South Carolinians repelled this assault in one of the first decisive patriot victories of the Revolution. There was an informative film and a slide show presentation documenting the long history of the fort through several major wars offered at the visitor center. After our tour, we boarded buses for Boone Hall Plantation and rode through the famous three-quarter mile “Avenue of Oaks.” Boone Hall was granted to one of South Carolina’s first Settlers, Major John Boone, in 1676. Originally a cotton plantation, Boone Hall spread over 17,000 acres. Hand-made brick and tile were also manufactured on the plantation. These same brick have been identified in the mansion, garden walls, slave cabins and many of Charleston’s oldest and most historic buildings. This plantation has been used in the filming of “Gone With The Wind”, and more recently, “North and South”. After touring the mansion and grounds, we returned to the Radisson and at 3pm, held our Annual Business Meeting.

Wednesday – We boarded buses for Patriots Point in Mt. Pleasant for a tour of USS Yorktown CV 10. We explored USS YORKTOWN at our own pace including MASSEY memorabilia on display, the Medal of Honor Museum and the many displays throughout the ship. Some visited the submarine “CLAMAGORE”. At 11:15, our Memorial Service was opened by the playing of our National Anthem, followed by the Pledge of Allegiance. Tom Norman gave the Welcome, followed with Bernie Barilla, MASSEY Association Chaplain, opening with prayer and scripture reading. Dick Pearsall read the names of the 5 shipmates who have passed since our last reunion. Fallen shipmates included Tom Potoskie, Association President; Henry Dinger; Stanley Woody; Warner Hetrick; and John Higby. At the conclusion of the reading, CDR Lance Massey, assisted by Plankowners Al Stelmaszeck and Ed Williams, tossed the wreath into the sea. Upon conclusion of the ceremony, we enjoyed a Navy style lunch served in the CPO Mess. After lunch, we continued our tour on our own. The MASSEY display included the tattered flag flown in the Okinawa Campaign, and a painting of the USS MASSEY, reported by CDR Massey as being painted by his aunt.

Wednesday evening was the MASSEY Association Banquet. During our social hour, CDR Massey introduced our guest speaker, Captain Lance E. Massey II, USN, grandson of the ship’s namesake. Captain Massey gave an excellent speech on “The New Navy”, concluding with an emotional tribute to “his hero”, his father, CDR Lance Massey. Following Captain Massey’s speech, we enjoyed an excellent buffet with 3 entrée’s and reportedly stated by our host, Tom Norman, “the best mushrooms I have had and scrumptious deserts”.

On Thursday morning, we said our goodbye’s and set sail for our XXII Reunion 25- 29 August 2011 in Washington, DC!

Note:  View the video below to see more reunion pictures and a video of the Reunion Banquet highlights graciously provided by Shipmate Tom Parker featuring the Massey family and Captain Phil Rush, former CO MASSEY, who recently passed away.