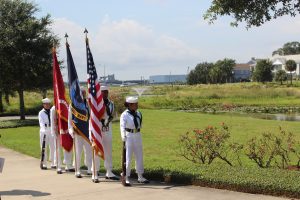 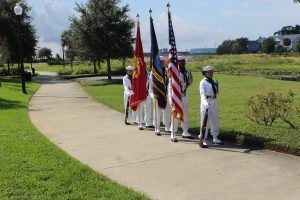 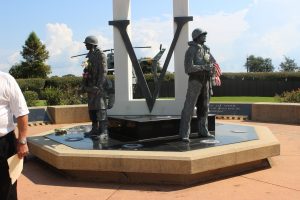 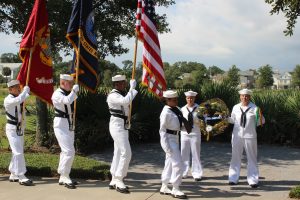 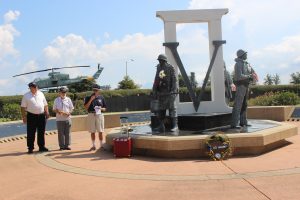 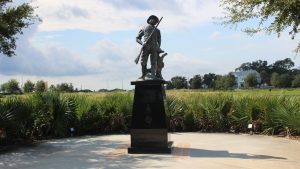 The Pensacola, 2016, reunion, was held Sunday, 25 Sept thru Wednesday, 28 Sept, at the Downtown Crown Plaza Pensacola Grand Hotel, and was hosted by Gordon Risk and others, in the absence of David Ford, who had a foot infection and could not attend. Beach Bum Trolley Tours handled our excursions and did a fabulous job! Bravo Zulu!

Sunday, Sept. 25
Check in began in the afternoon. We enjoyed a Welcome Aboard Reception in the hospitality room, with supply of snacks and liquid refreshments, the fun games started rolling with a dice game I had never seen and was fun to watch, as some of the players got wild with excitement! Check the pictures!

Monday, Sept 26
We boarded the trolleys for a narrated tour of the historic area of Downtown Pensacola, the “City of Five Flags”. We heard about America’s first settlement of 1559 followed by permanent colonization in 1698. The tour took us by the 1912 L&N railroad depot, Saint Michael’s Cemetery of the late 1700’s and the 1832 Christ Church which was used by Union soldiers during the Civil War as a barracks and hospital. In the Historic Village, we rode by several museums, the Julee cottage that was built around 1798 and Fort George. The tour stopped at the Veteran’s Memorial Park and Wall South. Beach Bum Trolley setup an impressive memorial service, with the active duty NAS Color Guard, remembering the passing of 19 of our Shipmates since our last reunion with a bell ringing ceremony honoring the memory of:

Taps was played. After the memorial service, the tour stopped at McGuire’s Irish Pub for lunch. After Lunch, we boarded trolley for return to Pensacola Grand, Hospitality room was open.

Tuesday, Sept 27
We boarded trolleys for the National Naval Aviation Museum, the largest museum of air and space memorabilia outside of the Smithsonian. We enjoyed a guided tour of the museum, given by a terrific guide. We also viewed an IMAX film. We had an enjoyable lunch at the Cubi Bar inside the Museum. We were to have a more in depth exploration of Naval Aviation, a tour of Hangar Bay One, but it was closed for the day. We also had a tour of the virtual flight deck, actually thought you were standing on the flight deck while launching and recovering Airplanes. We did not get to see the Blue Angels practice as they were not practicing that day. Returned to the Downtown Crown Plaza Pensacola Grand Hotel.

Upon arrival, we met in the library, for the annual USS MASSEY Association Executive Committee (EXCOMM) and the USS MASSEY business meeting, in accordance with the association bylaws. The executive committee (EXCOMM) presented its agenda for association discussion. A quorum was met with the following EXCOMM members present: Gordon Risk, President; Don Heenan, Treasurer; Tom Norman, Secretary; Bob Radziwon, Membership & Historian; Tom Truesdale, Master At Arms, Butch Walters, Supply & Procurement. David Ford, Vice President, Bernie Barilla, Chaplain, and Past President, Dick Pearsall, were absent. The meeting was called to order by Gordon Risk, President, Acting Chaplain, Charlie Weaver, opened the business meeting with a prayer and followed with the pledge of allegiance. Gordon mentioned that David Ford could not make it due to an infection in his foot, making walking difficult. Then he thanked those who helped with the reunion setup and making runs to the store for supplies, including Ed Holderness, for getting him onto the Base Exchange for supplies. Next on the agenda, was the report of officers; Don Heenan, Treasurer, reported that the bank accounts are solvent and we are on target for long term spend down. Tom Norman, Secretary, reported that since the inception of newsletters via email, by choice, to those who would like their newsletters that way, has drastically reduced the cost of newsletters and time getting them out. My newsletter expenses reported on last report, from 10/7/2013 to 11/1/2015 was $2733.66 for the 2 year period with an average of $1366.83 per year. The newsletter expenses for period of 11/2/2015 thru 10/15/2016 was $573.34. Butch Walters, Procurement & Supply, stated that he no longer ordered items for display at reunions due to the reduction in sales, but, you could call him and place an order and he would order and ship it for a minimum fee. Next on the agenda was the election of board members, Gordon asked if there were any nominations from the floor, being none, a motion was made by, I believe, Joe Broussard, to accept the existing officers for another term if they agreed and was seconded. All existing board members agreed to serve another term. Gordon also mentioned that we have a total of 76 attendees, with, 3 First timers, 2 Plank owners, 36 Shipmates, 25 wives, 11 family members and 4 guest with us. Under new business, 2017 reunion was main thing on the agenda. After little discussion and several liked Annapolis, vote was taken and Annapolis was chosen. Also discussed was cities such as Savannah that have historic districts. It might be better to use a down town hotel rather than an airport friendly hotel. The room costs might be higher but that could be off set with a much lower tour costs that do not require a bus transportation. Also more free time could be had for local attractions. With no further business, motion was made and seconded to adjourn and proceed to the hospitality room for snacks and refreshments and to make ready for our final day and our trip to Eglin AFB

Wednesday, September 28, 2016
We boarded buses for 1 ½ hour ride to Eglin AFB. We attended a briefing in the Squadron Auditorium after arrival. After the briefing, we departed VFA-101, we enjoyed a huge lunch at the Bayview Club onboard Eglin AFB. After lunch, we enjoyed an additional tour of Eglin AFB, watching the aircraft taxing and taking off. Had group photos taken of us by the staff, but no copies as of yet!  We departed Eglin AFB, returning to Pensacola Grand Hotel.
At 6pm to 7pm, we had a Cocktail Hour with discounted drinks provided by the Association. The Banquet Dinner Commenced at 7pm. Great food! Everyone seem to enjoy the conversation at each table and some of us roamed around to different tables talking of our days at sea and in ports. All seem to enjoy the atmosphere.

FAIR WINDS AND FOLLOWING SEAS AS WE SET OUR COURSE FOR REUNION 2017.

Reunion Attendees: We had 76 attendees, including 36 Shipmates, 25 wives, 11 family members and 4 guest with: