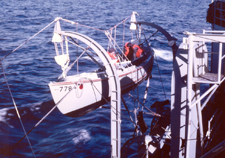 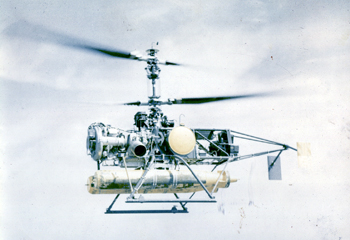 MASSEY left Newport in January 1964 and returned to the Caribbean for the annual Atlantic Fleet Operation Springboard. Liberty ports were San Juan and Kingston. The ship headed home on February 9 with the latter part of February, March, and April 1964 spent in Newport, Rhode Island preparing for a deployment with the SIXTH Fleet in the Mediterranean.

On 29 April 1964, the MASSEY sailed from Newport with Destroyer Squadron 10 for a Mediterranean deployment as part of the SIXTH Fleet. Visits were made by the ship to LaSpezia and Naples, Italy; Cartagena and Barcelonia, Spain and Marseille, France. During this deployment, MASSEY was cited by COMSIXTHFLT for outstanding performance in communications and replenishment operations. While deployed, MASSEY carried an embarked electronic warfare support detachment of one officer and seven enlisted housed in a “CONEX” box temporarily stored topside. Given the Soviet Navy threat in the Mediterranean at that time, the detachment’s work was highly classified with the CONEX box area “off limits” to ship’s company. This generated endless scuttlebutt among MASSEY’s crew as to what this group was really up to. If the “CONEX Box Detachment” proved effective in anything it was in generating scuttlebutt! With the deployment winding down, MASSEY returned to Newport on 26 August 1964 and the “big box” was quietly removed. During this deployment, MASSEY participated in operations with our Navy’s first nuclear powered task group – USS ENTERPRISE CVN 65, USS LONG BEACH CGN 9, and USS BAINBRIDGE CGN 25 during their circumnavigation of the world’s oceans without refueling. A highlight of that period was watching a drag race between the 3 nuclear ships with LONG BEACH declared as the winner but ENTERPRISE catching her rapidly at the end of the 5 mile run.

Upon completion of a leave and upkeep period in November 1964, MASSEY commenced operating with the “Blue” group of the SECOND Fleet. November was spent in at- sea operations between Norfolk, Virginia and San Juan, Puerto Rico. After completion of Fleet operations, MASSEY visited San Juan from 13 to 16 November and returned to Newport on 25 November for the holiday stand down period.

On 12 February 1965, CDR John S. Kearns relieved CAPT Philip Rush as C.O. The Skipper had received his fourth stripe a few months prior.

On 15 February, MASSEY proceeded South via a port visit to Mayport, FL to the Puerto Rico OPAREA where she was escort for USS INDEPENDENCE performing plane guard duties with a port visit to Charlotte Amalie, St.Thomas, U.S. Virgin Islands from 5-7 March. In early April MASSEY provided escort services to USS AMERICA CVA-66, then the newest Big Deck in the Fleet.

On 1 April the ship reported to Commander, Anti-Submarine Warfare Force, U.S. Atlantic Fleet (COMASWFORLANT), for operational control and over the next several months operated with various units of Anti-Submarine Warfare Carrier Group THREE embarked on USS ESSEX CVS-9, including participation in PHIBASWEX/MEBLEX 65. This operation was the largest amphibious operation conducted since the Korean War and stretched from Marine Landing Force embarkation operations off Camp Lejeune to an assault on Vieques Island off Puerto Rico some 1400 miles away. Thirty nine amphibious ships formed up the main body with a screen of 25 cruisers, destroyers, and frigates. MASSEY was assigned as an inner screen unit and patrolled the lanes between the FORM 60 columns of the 39 amphibious ships. With the ship positioned inside the main body, MASSEY streamed her VDS to search for the USN submarines operating as the opposition force (OPFOR). This proved to be more than a challenge given 2 of the 4 OPFOR subs were the Navy’s newest nuclear attack submarines (SSNs). Heretofore MASSEY’s ASW Team was well practiced in countering the diesel boat threat but the advent of the SSN with its speed, quietness, and endless endurance without the need to “snorkel” to replenish the internal air supply and recharge batteries proved to be a tough battle. Despite numerous “under attack” green flare sightings, the amphibious task force was delivered to Vieques with MASSEY conducting actual and simulated shore bombardment exercises in support of the Marines ashore.

After return to homeport for leave and upkeep, MASSEY transited the Cape Cod Canal on 20 September enroute to Boston for repairs to her boiler uptakes. The General Ship & Engine Works yard in East Boston was to be home for the short term availability and to many MASSEY sailors seemed to have a flavor of a foreign port with the rat guards getting plenty of activity! Finishing up repairs, MASSEY departed Boston on 12 October on independent ship exercise (ISE) orders as a radar picket ship and potential rescue duty for one in the series of the Apollo Gemini orbital missions. MASSEY was assigned to station GTA-6 at 27-27N/45-15W off the east coast of South America in the South Atlantic! Given the distance, on station time involved, and the lack of any Navy replenishment ships in the South Atlantic (SOLANT), fuel was at an absolute premium. The ship operated on one boiler and one shaft with minimal electrical and hotel services provided in order to stretch the available fuel. For the crew this proved to be an interesting change of pace with reduced watches and time for cleaning, painting, card tournaments, and Fishing! Shark fishing proved to be the big draw and as the sharks grew in size and number, the ingenuity of the crew rose to the challenge in fashioning larger lines with bigger hooks. Nowhere could a large screwdriver be found by the 3rd night of the SOLANT Shark Tournament!

Heading home from a non-eventful Apollo support mission with a 3 day port visit to Bermuda, MASSEY proceeded to Washington, D.C. for a State Department arranged visit to the ship by the Head of the Russian Naval Legation to the United States. Transiting the relatively shallow and tricky Potomac River with two 80 year old, twin brothers as the Bar Pilots added a lot of humor to a very long sea detail. Moored at the Washington Navy Yard, the port visit offered a great opportunity for the crew to see the Nation’s capital and all the historic sites while the duty section did a yeoman’s job at hosting nearly 10,000 visitors to the ship in its 3 days in port. Departing Washington, MASSEY returned to Newport on 13 November with a Admin & Material Inspection scheduled 19-23 November. Heading to sea again on 29 November, the ship conducted convoy exercises in the North Atlantic, returning to Newport on 16 December for the holiday leave and upkeep period, rounding out 1965.