1957 – The North Atlantic Cruise To Remember

USS MASSEY spent the next five years operating with the Atlantic Fleet. She conducted various exercises and type training off the East Coast and in the Caribbean, and made annual deployments to the Mediterranean with the SIXTH Fleet and NATO forces. In 1957 she sailed to northern Europe and the North Sea for operations with NATO. This proved to be a cruise to be remembered as MASSEY sailors recount:

“What a great weekend in Belfast! But then we hit Rotterdam! Ten days to soak up Holland’s culture. There was so much to offer, from Erasmus to Rembrant and Van Gogh. If you traveled into the country there are such things as two story high windmills that adorn the calm peaceful flatlands. And those gardens of bright elegant tulips seemed never ending! How about Heinekens? Then the tour to Paris with all the attractiveness of a midsummer’s night dream.”

“Our bus wheeled through Holland, Belgium and part of France. We arrived in Paris about dusk. After checking into our hotel, we had chow at a local restaurant. Our first impression was the Eiffel Tower. You could see all of Paris. We visited the tomb of Napoleon; …the Emperor lies in a red marble casket. The next afternoon we walked the Palace of Versailles and saw the ‘Room of Mirrors’. Outside the gardens stretched for miles and bright flowers were in full bloom. Our evenings were spent watching performances of gorgeous dancing girls at the Moulin Rouge. At The Lido, try to picture a violinist in blue dinner jackets playing soft music while enchanting women danced in fountains of tinted water.” 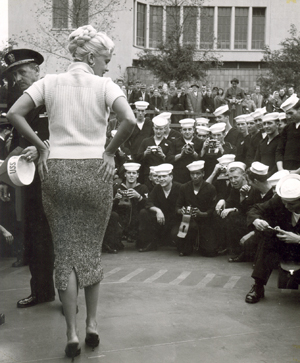 “Our last day in Rotterdam was the 11th of October 1957. This was perhaps the most memorable day to the crew during the entire cruise. On that Friday afternoon, the MASSEY was proud and pleased to have aboard a guest and ‘honorary shipmate’ the lovely film actress – Jayne Mansfield.” Our 24-year-old ‘shipmate’ stated; “I am very happy to be on your beautiful ship. You are all very wonderfully sweet and the officers are tops… very chic!”

“… Once again we have proven the value of friendship on foreign shore. The Netherlands and Rotterdam in particular will long remember 220 of America’s finest Ambassadors, each wearing the MASSEY patch. What Holland thinks of us, they think of our country, because we are America. The large crowd of well wishers on the pier that saw us off was a testimonial to the success of our efforts. In this we can all enjoy the satisfaction of a Job Well Done.”

6 thoughts on “1957 – The North Atlantic Cruise To Remember”