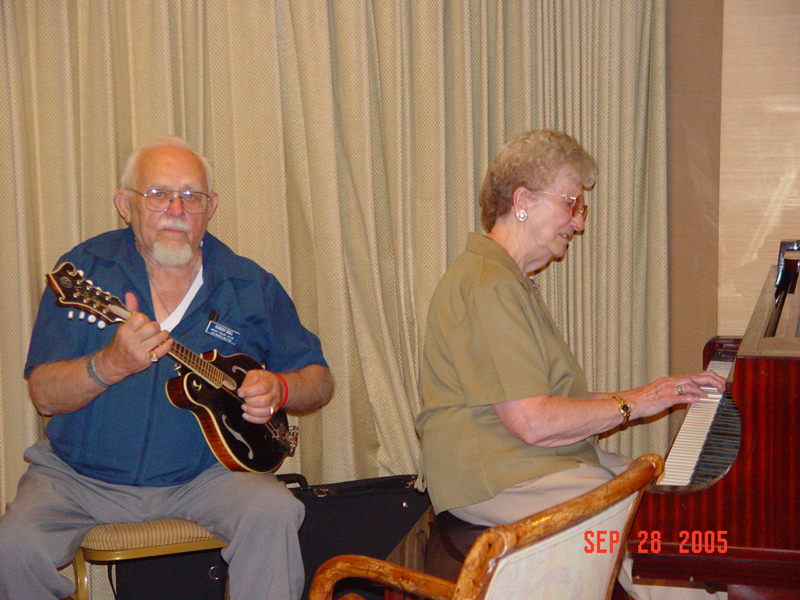 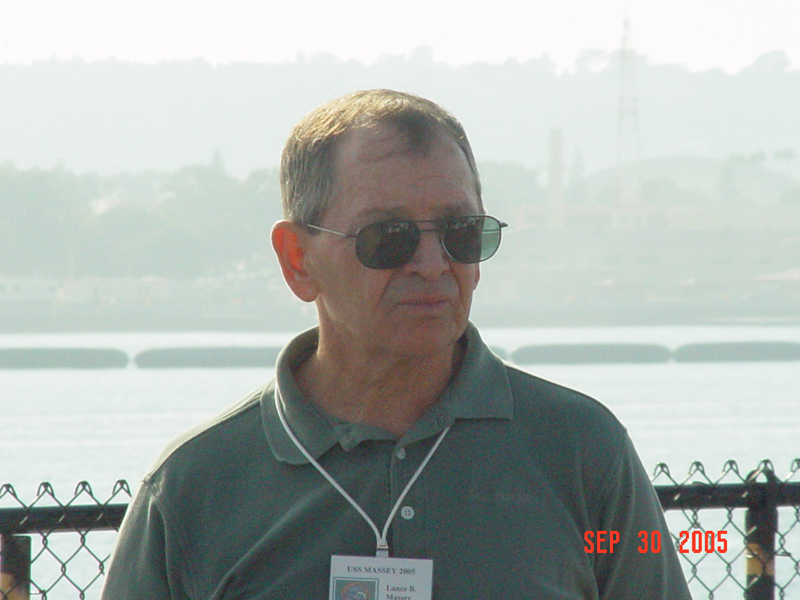 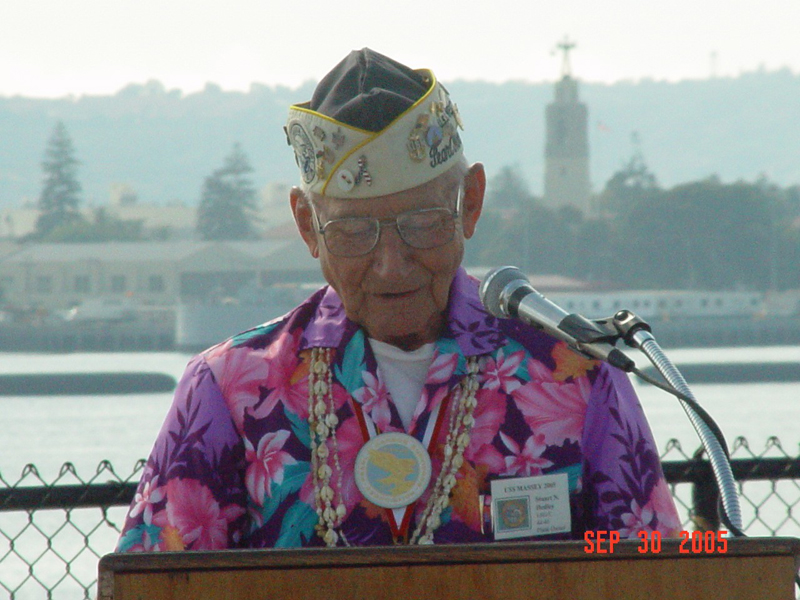 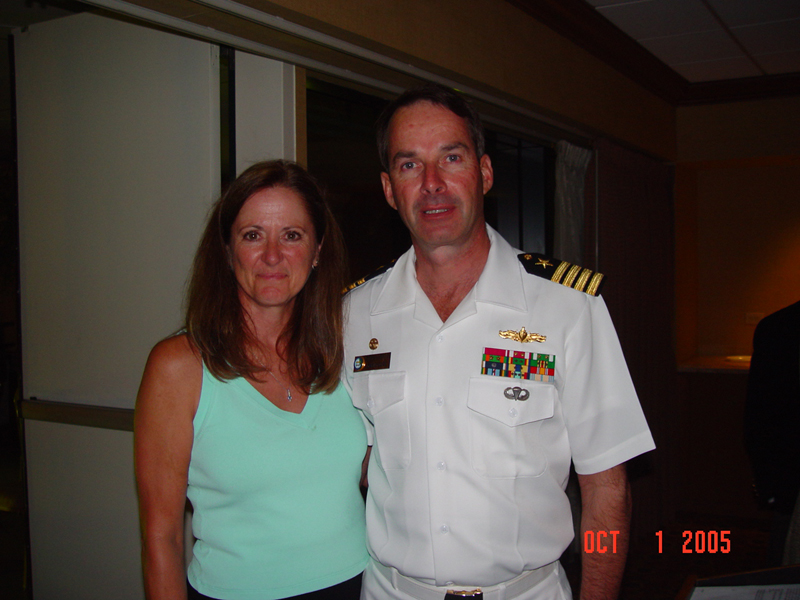 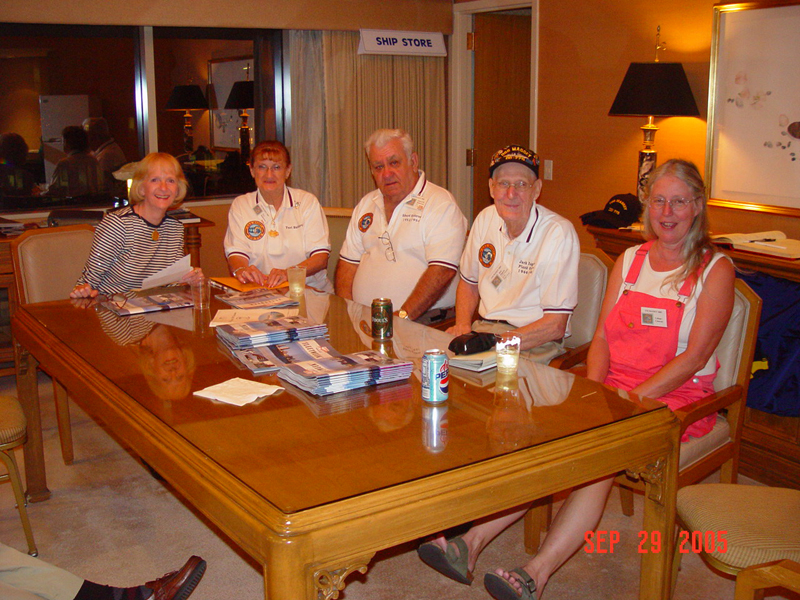 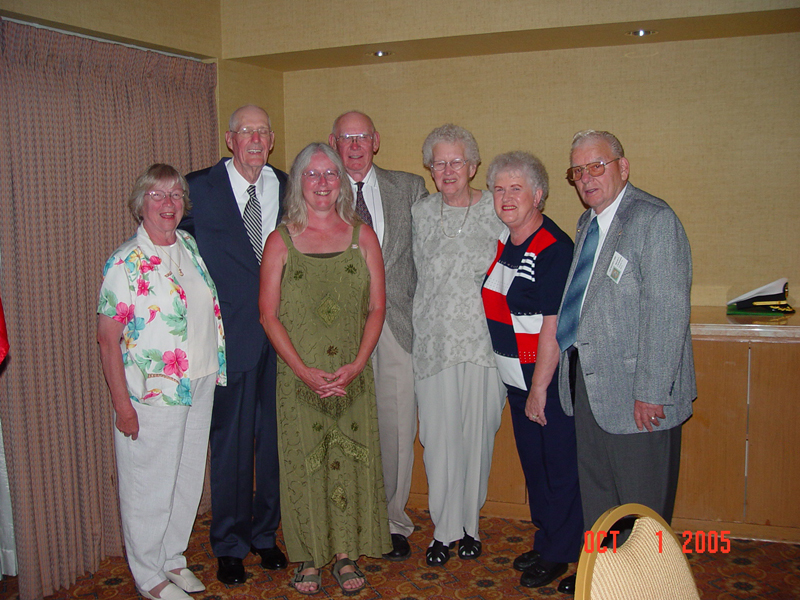 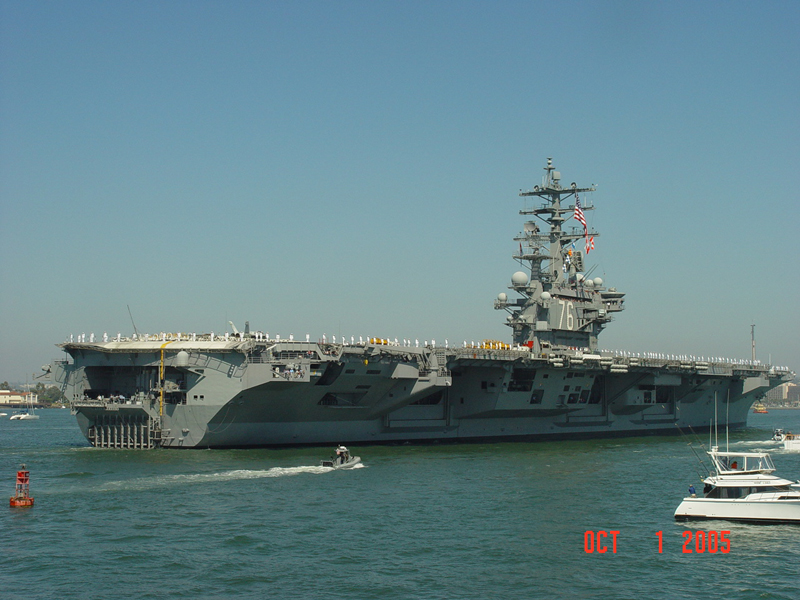 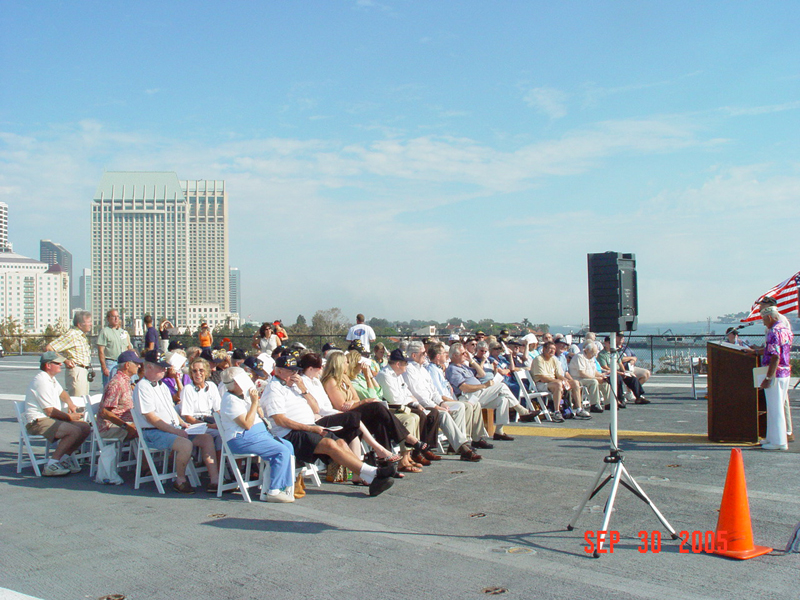 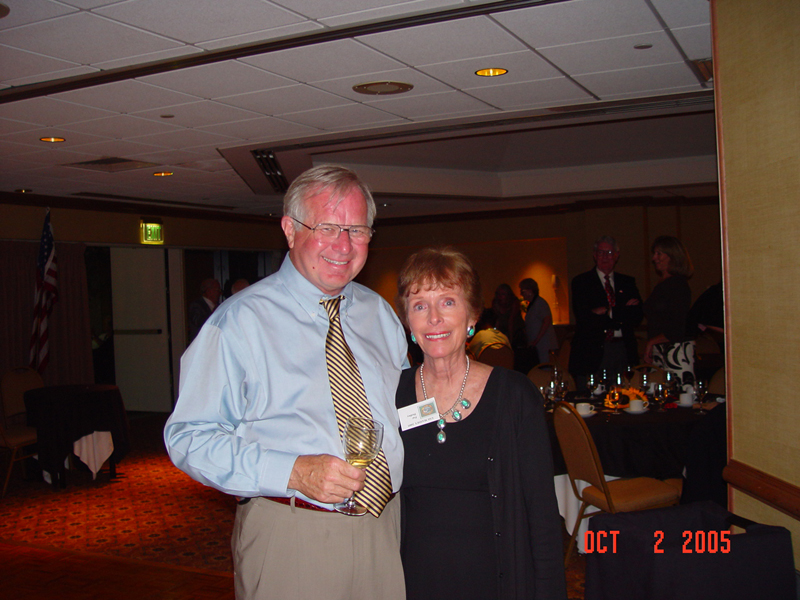 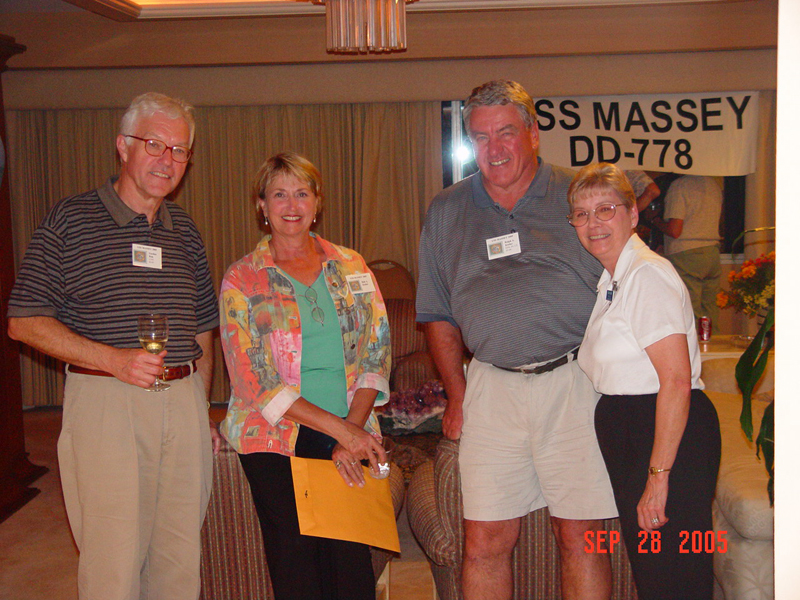 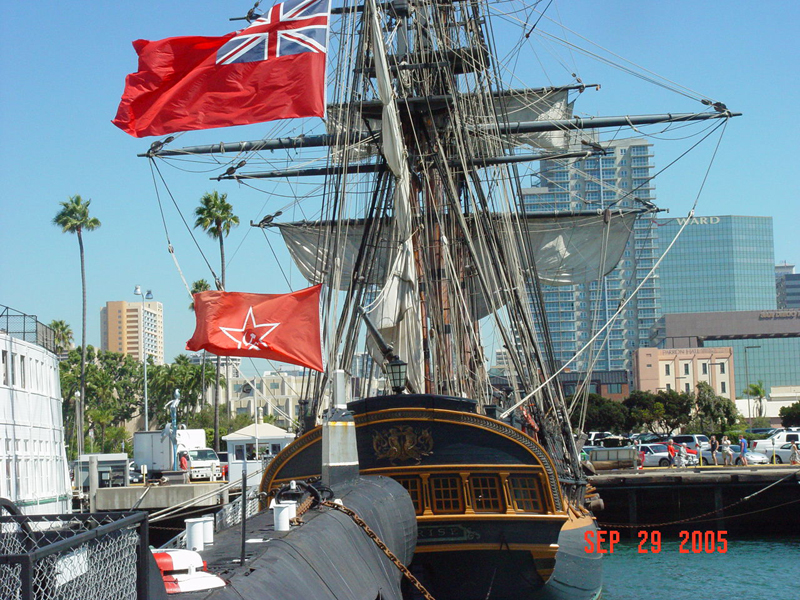 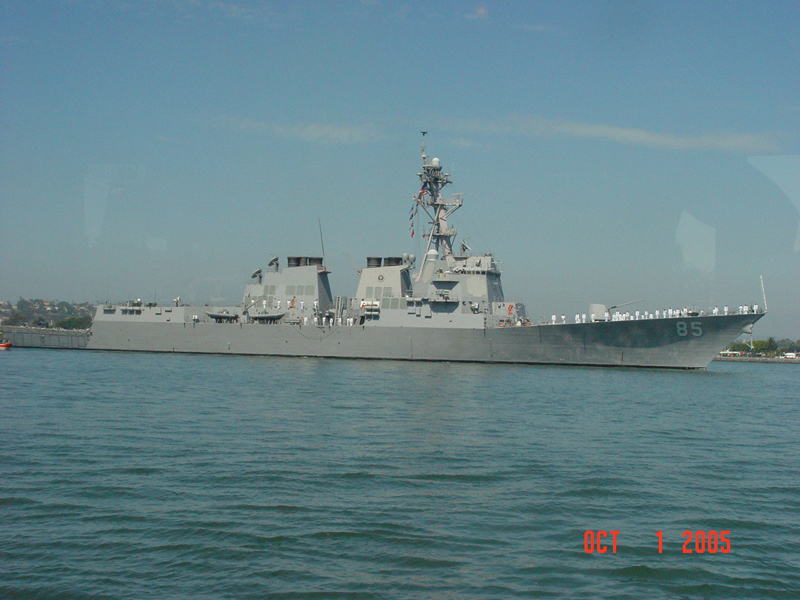 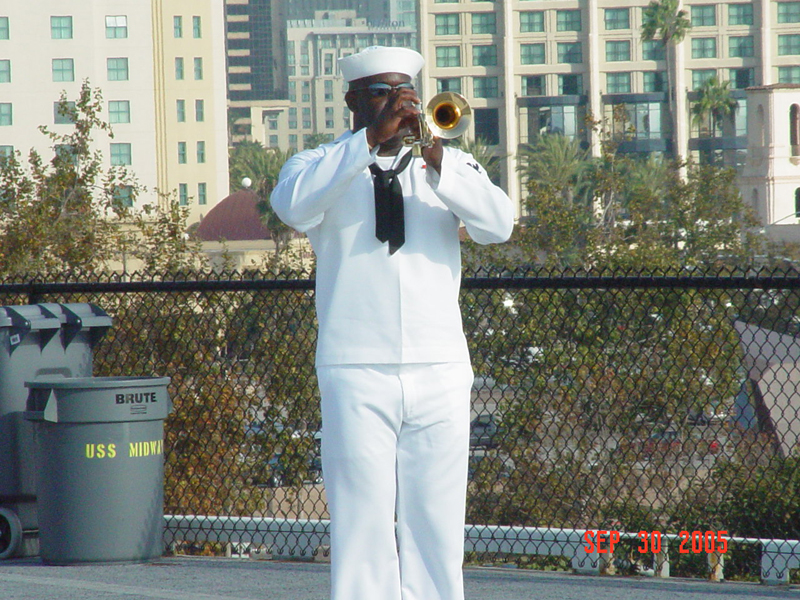 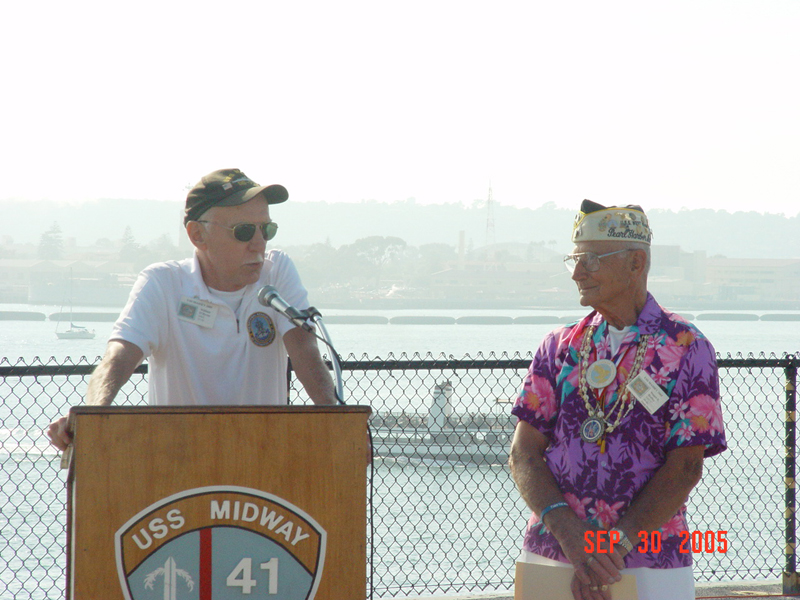 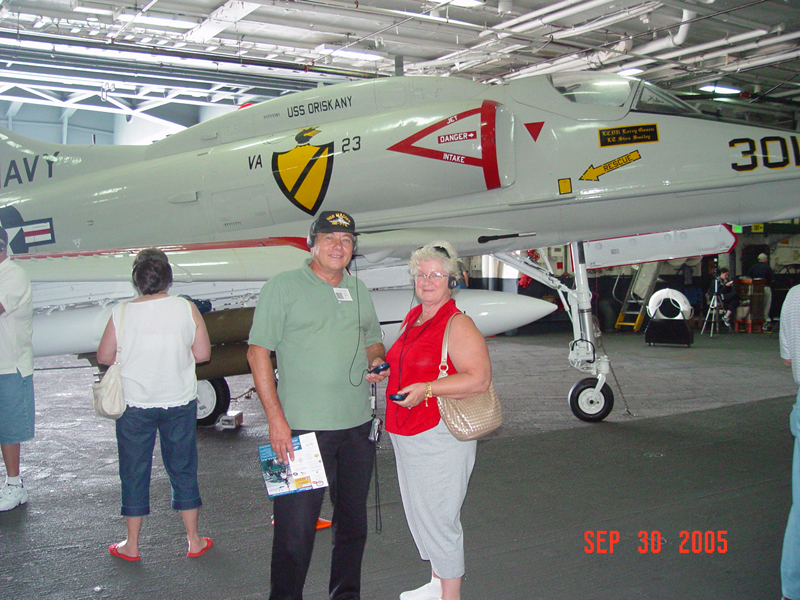 For those who were not with us in San Diego, you missed a great reunion! Pete Hedley and crew did a superb job of orchestrating the reunion in the beautiful Wyndham Emerald Plaza Hotel right in the center of downtown with a great view of the world before us. Our hospitality room was the Presidential Suite on the 25th floor! Talk about going first class with a gorgeous, panoramic view of the harbor, downtown, Coronado, and San Diego Bay. Music and sing-a-longs filled the air every night, once again thanks to Bob Doll and Gwen Hanlin!

On Thursday, the group took tours of downtown San Diego, the restored gas light district of town, and the famous San Diego Zoo. The tours were provided on old fashioned trolleys and the tour guides were excellent. On Friday, the group toured the Naval Amphibious Base and Naval Air Station at Coronado across the bay, again by trolley. In the afternoon, we toured the USS MIDWAY CV 41 which has been converted into a floating museum. The tour was self guided with an audio headset and tape that gave you a good sense of what life is like on a “bird farm”. For those “attention to detail” folks, MIDWAY has the largest flight deck in square feet of any carrier ever built including today’s NIMITZ Class carriers. At 1530, a memorial service was held on the flight deck of MIDWAY with Chaplain Stu Hedley, a MASSEY Plankowner and Chaplain of the Pearl Harbor Survivors Association presiding. The setting could not have been more memorable nor beautiful. Sitting on the MIDWAY named for the battle in which our ship’s namesake, LCDR Lance Massey was lost leading the attack on the Japanese carrier force; his son, CDR Lance Massey, USN (ret) participating in the ceremony honoring his Father; an Arleigh Burke Class destroyer passing by; and the sun starting to set gave a very unique sense of relevance to the occasion. As we were starting to succumb to the setting, Chaplain Hedley then hit us with an unexpected course change during the ceremony by asking for crewmembers to step forward with “sea story” remembrances of their time on MASSEY. Bill O’Byrne topped the sea story charts with his candid remmembrance of an infamous MASSEY Chief who could turn anyone’s stomach over with his magic moves!

On Saturday, we were treated to the Pacific Fleet’s Sea & Air Parade aboard the Lord Hornblower! What a treat for Old Sailors! The weather was absolutely beautiful, the lunch on board Hornblower was great, and the underway view of our Navy’s various classes of ships and types of aircraft passing in review was spectacular. There was never a dull moment! When USS ABRAHAM LINCOLN sailed by close aboard, we were awestruck by her size and her spit shined appearance. Awesome was the only descriptor! Saturday night was the formal dinner and the setting was again first class! The guests of honor were Commodore Buzz Little, COMDESRON 1, and his wife. Several new shipmates joined us for their first reunion with the “young kid” honors going to the Cooke Brothers, Bennie (65-66)and his wife, Carol and Charles (65-68)!

Sunday was farewell for most of us with a send off breakfast at the hotel. Our hats are off to Pete Hedley (63-64) and wife Pat, XO Jim (64-66) and Caroline Woolway, Lance and Judy Massey, Robert Doll (44-46) and Gwen Hanlin, and all the “one step forward” volunteers who helped keep the stores refreshed and the beer cold. Well Done from your fellow MASSEY Shipmates! See you all in Branson, MO. next year!