USS MASSEY returned to her homeport – Mayport, Florida in March of 1961. The ship moved in April 1961 to the Charleston Naval Shipyard for the installation of the Variable Depth Sonar (VDS). This took a prominent place on the fantail where a large reel of support and electronics cable led to the ‘fish’. With this towed array sonar, MASSEY’s FRAM II modernization was completed. This new variable depth sonar could now probe for submarines through the thermal layers of the ocean that heretofore had been the submarine’s protection from hull mounted sonar detection. Submarines did not like the idea of a destroyer in the area with a deployed VDS for other reasons too – they could get a ding in their sail!

After a special mission to the Caribbean in August 1961, MASSEY returned to Mayport for a tender repair availability (TAV) and additional carrier escort operations. In the late fall the MASSEY entered the Charleston Naval Shipyard for an interim repair availability.

MASSEY returned to Mayport in December 1961 for the Christmas holiday. On 1 January 1962, USS MASSEY was re-assigned to Destroyer Squadron 10, homeported in Newport, Rhode Island. During the winter months, the ship worked with the Navy Underwater Sound Laboratory of New London, Connecticut conducting various tests with the new Variable Depth Sonar (VDS).

The spring and summer of 1962 were spent participating in Project Mercury- the space shot of astronaut Scott Carpenter. During this period, the ship visited the Canary Islands. MASSEY also worked with Task Group Alfa, a submarine hunter-killer group, in a VDS demonstration for the Secretary of the Navy. The ship then made a goodwill visit to South Amboy, New Jersey.

MASSEY left for the Mediterranean in early September 1962 and participated in many SIXTH Fleet and ASW exercises. The ship’s ports of call included Naples, Italy; Iraklion, Crete, Rhodes, Greece; Messina, Sicily; Toulon and Gulfe Juan, France as well as Barcelona, Spain. The ship’s band became quite a hit and the MASSEY adopted a French orphanage for Christmas. 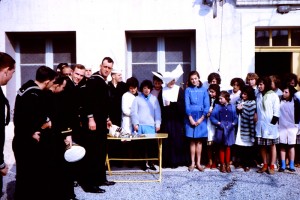 The following is a translation of an newspaper article from Toulon, France, that appeared Christmas week, 1962:

LANDING OF THE U.S. NAVY … THE ORPHANAGE OF PROVIDENCE A TOULON

Where 30 boys, not to mention the Christmas tree, spent many long hours at numerous works of maintenance.

Among all these valiant sailors, during a moment to rest, a one little orphan has already found her favorite sailor.

For the students of La Providence and their Mother Superior, the days before Christmas took on not a fairy tale, but a very human story where the nature of beneficent  genies,  the officers and crew of a ship American, “USS MASSEY, ” delegated a group of their own for a very beautiful act, completed  with kindness and gentleness. Listen up however since the time is where traditions and legends are about to find the way to the hearts of men.

The U.S.S. MASSEY, an American Navy destroyer, one of four ships that arrived recently in our port, and commanded by Cmdr. HR. Cook, will be here for the holiday of the Nativity, before heading off to another port the Mediterranean. Last year, this same ship was, for Christmas, at Mayport, giving each one on board a chance for a possible family holiday.  And the whole ship , after the Grand Council, adopted  “La Providence” where the orphans  have found the home that they were missing.

There was first of all a collection to which everyone was happy to participate, and which was used for a reception, a reception in which 50 children were invited on board, on Christmas day, and included a meal and the distribution of toys. On Thursday, a group of sailors left the MASSEY with materials representing  almost every specialty, and this very peaceful “commando group” soon made known their objectives.  The commander had accompanied and allowed them to play the role of benevolent genies.

Having greeted the Mother Superior they turned into gardeners, painters, plumbers, and electricians. Very quietly and without losing a second, while some attacked the interior walls, other laid out pathways in  the garden. Another group prepared the fairylike garland for the Christmas tree and the fourth group inspected the plumbing. With the same application as on board the ship or in their homes in Massachusetts, Ohio, Florida, Illinois, Connecticut, young sailors transformed, here the walls of the entryway, those in the laundry room, complementing renovations that La Providence had been hoping for the last few years.

Begun on Thursday, this dynamic work was continued yesterday in the preparation for the arrival of December 25, where, in the framework of a  destroyer, the officers and crew of “MASSEY” would celebrate Christmas, far from their country, by giving a traditional  impression of Christmas to 50 children, who had found in in La Providence, a second home.

Returning home in April 1963, the MASSEY went through a regular overhaul in the Boston Naval Shipyard. She was one of the first FRAM II ships to go through a regular overhaul. During this time her DASH helicopter installation was completed. MASSEY headed for Key West, Florida in November 1963 to provide live operator training at sea for the land based Sonar School students. It was here in Key West that CDR Philip J. Rush relieved CDR Robert H. Cook. MASSEY went on to GTMO for refresher training then returned to Newport for Christmas. 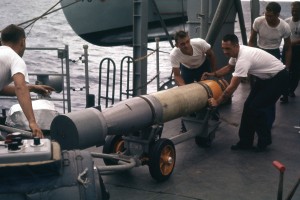 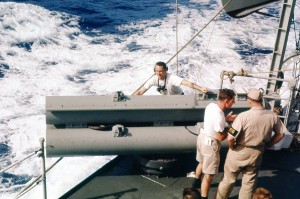 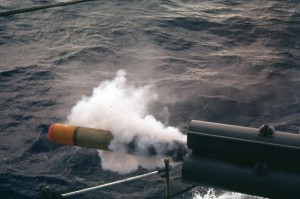 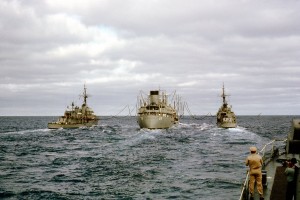 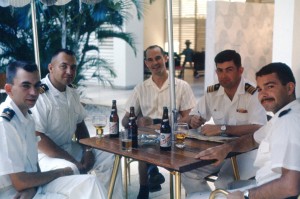 Want to know more about this particular time of MASSEY history? Click here to read the Fall 1962 Family Gram authored by then Capt Bob Cook for the folks at home that details ship events during the deployment.