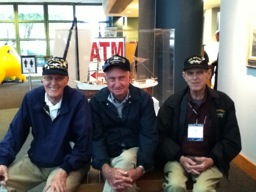 The 2013 reunion, hosted by John and Lynne Bertram, was held from Thursday, October 10 to Monday, October 14, 2013 at the Sheraton Inn in Frazer, PA, about 25 miles west of Philadelphia.

We had 83 attendees, including 47 shipmates with 2 Plankowners and 2 first time attendees. We were again honored by the attendance of Lance and Judy Massey.

John and Lynne Bertram would like to thank Juan de la Cruz and Tom Norman for assisting on the preparation; Andy Kubishen, Tom and Kathy Truesdale, Gordon Risk and Lynne Bertram for making an airport pickup and delivery of a shipmate; Teri Risk, Connie Jordan, and Jean Weaver assisting Lynne with the hospitality suite; and thanks go to Phil (Smitty) Smith for the donation of 12 bottles of wine; Duane and Karen Edwards for a gift basket for a free raffle at the Banquet.

Thursday, October 10th: Arrival and check-in day for many, some arrived a day or two earlier. The hospitality room, stocked with hors d’oeuvres, soft drinks, wine and beer, was open each evening for meeting, greeting, renewal of old friendships and starting of new ones and was enjoyed by all. From 1800 to 2000, we enjoyed a complimentary Deli-Buffet.

A wreath was tossed overboard by Plankowners Wendell Davis and Jack Zagaros assisted by our honored guest Lance Massey. We then toured the mighty USS NEW JERSEY BB 62. Leaving, many of us soaked up some of the rain walking or running to the buses.

We then headed to the Independence Seaport Museum for lunch and guided tours of the museum galleries, the USS BECUNA and USS OLYMPIA and getting wet again. Afterwards, we returned to the hotel. The hospitality room was open.

Saturday, October 12th: After a breakfast buffet in the hospitality room, we boarded the bus for a tour of historic Philadelphia. We were unable to enter Independence Hall or view the Liberty Bell close up due to closure by the Government shutdown. We were able to view the Liberty Bell through a window. After lunch, we toured the National Constitution Center including the presentation of “Freedom Rising.” Afterward, we toured Christ Church and then returned to hotel. The hospitality room was open.

Initial discussion was focused on Old Business with the EXCOMM agreeing that the Association bylaws were in good order and that there was no need for further amendments or discussion at this time. Dick Pearsall stated that the concern voiced at the 2012 EXCOMM meeting about sole access to the association funds being limited to the Treasurer has been corrected. Dick as President is now listed on a joint account with Treasurer Don Heenan. The President should, as a routine, be on the joint account with the Treasurer.

New business topics were then addressed. The following were discussed with action/comments as indicated: A tribute to Captain Phil Rush was discussed. Gordon Risk announced that the Captain’s internment at Arlington National Cemetery will be at 1100 on 17 January 2014. Several EXCOMM members indicated they plan to attend the ceremony. The issue of flowers was discussed and it was agreed that Dick Pearsall will check with Arlington on typical flower display arrangements as an action item. Gordon Risk mentioned a tape recording from the Charleston reunion of Captain Rush speaking at the dinner and proposed that the tape be posted on the web site. Gordon agreed to pursue finding the tape and work with Dick Pearsall to get the tape posted.

A similar discussion was then held concerning the passing of Jerry Goodson, former Secretary of the association. Jerry’s wife AG stated that Jerry’s wish was that a contribution from the association to the Wounded Warrior organization be made. The EXCOMM agreed to propose a $200 donation in Jerry’s name be an agenda item at the pending association business meeting.

Butch Walters voiced concern that the Ship’s Store inventory and sales were fairly stagnant due to the lack of new members. He proposed that the inventory be raffled off and that any new items needed could be easily ordered through him. The EXCOMM agreed to do a free raffle at the pending business meeting.

Dick Pearsall voiced his opinion that the association needs to review the standard operating procedure (SOP) for reunions due to the cost for a 4 day event and the advancing age. With no further business, EXCOMM meeting was adjourned.

After a breakfast buffet in the hospitality room, we boarded the bus for a tour Longwood Gardens. After lunch, we continued to tour on our own. At 1500, we boarded bus for return to hotel.

Annual Business Meeting
The USS MASSEY Association members present for the Philadelphia Reunion met at 1600, 13 October, 2013 at the Sheraton Great Valley Hotel, Frazer, PA. The association business meeting was held in accordance with the association bylaws. The Executive Committee presented its agenda for association discussion. The following Executive Committee members were present: Dick Pearsall, President; Phil Smith, Vice President & Past President; Tom Norman, Secretary; Gordon Risk, Historian; Butch Walters, Supply & Procurement; David Ford, Chief Master At Arms; and Bernie Barilla, Chaplain. A roll call of the officers found Don Heenan, Treasurer, as absent. Dick Pearsall opened the meeting thanking John and Lynne Bertram, reunion hosts, for the superb work done in orchestrating the schedule of events. Dick also acknowledged two first time MASSEY attendees, Adam Seid and Victor Collinino & his wife. The minutes of the 2012 reunion were read by Tom Norman and approved by the members. Tom also updated the members on the necessary procurement of a new printer. The Report of Officers was next on the agenda. Dick Pearsall provided a synopsis of the Treasurer’s Report in Don Heenan’s absence and stated that the current balance was more than sufficient to handle all reunion expenses. Dick also stated that he would contact Don Heenan to schedule an audit of the account to ensure our financial house is in good order. The report from Sue Radziwon as the Membership Committee head indicated there were several new members since the last reunion and that the member roll was up to date.

Steve Jordan then provided a briefing on the planned 2014 reunion to be held in South Portland, ME. The format will be a “3+1” day event with the banquet to be held on Saturday night and Sunday, the +1 day, to be for local activity of your choice. More exact details to follow.

Before we adjourned, we had a free raffle of the left over supplies, 1st winner, 1st pick and so on until left over supplies were gone. Butch stated that due to decreased demand, he would not order shirts, etc. in advance. However, if you want an item, contact Butch at wcwalters2000@yahoo.com or call him at (908)258-9223

Banquet
1800, Our Banquet began with a social hour with
cocktails, cash bar, in the Regency Ballroom.

John Bertram introduced our speaker for the evening, none other than Dr. Benjamin Franklin, himself. Mr. Franklin talked a bit about his life and some of his quotes: “Either write something worth reading or do something worth writing;” “Three may keep a secret, if two of them are dead;.” “Tell me and I forget, teach me and I may remember, involve me and I learn;” “A Penny Saved is a Penny Earned;” “Fear not death for the sooner we die, the longer we shall be immortal;” “Justice will not be served until those who are unaffected are as outraged as those who are;” “By failing to prepare, you are preparing to fail.” He was interesting, but his clothes were a little smelly from age. After a delicious dinner, we

Monday, October 14th
After breakfast buffet in the hotel restaurant, we said our goodbyes and set sail for reunion XXV in South Portland, Maine.